The Tulpehocken Creek Valley Parkway is a long linear park situated along the Tulpehocken Creek. This parkway along the stream incorporates several area parks including Stonecliffe, The Leisure Area, Gring’s Mill, Red Bridge Park, and The Heritage Center. Each park is distinct with different uses and purposes.

Stonecliffee Park was the first park of the County Park System along the Tulpehocken Creek. Stonecliffe was unique for its time. This park was a “complete design concept” in that it incorporated not only a park design, but also included recreation facilities. Recreation and playground equipment were installed there, as were new types of equipment not yet found in other places. This new special equipment had no moving parts, and was very unlike traditional playground equipment. Plus, it was less breakable.

Below: Stonecliffe Park – Click or touch Images to Enlarge.

The development of Stonecliffe took place in three phases. Phase One involved the basics: planning the park, grading it, putting in parking, seating, restrooms, picnic areas, etc. This park was meant for young and old! Phase Two involved bringing in playground equipment — a new kind — that could be used as much by adults as kids. Phase Three involved building the field areas. The city wanted softball fields and football and soccer fields were also built.

Stonecliffe has undergone several changes since its inception and construction. Early on there was an ice skating rink, this did not last long. It was a fun activity, and was fairly successful in the beginning, but was labor intensive. At night fresh water had to be put on the surface. By February, the macadam absorbed heat and it was difficult to keep the ice hard.

Another change was the rebuilding of the fishing dock in concrete. The first fishing dock at Stonecliffe was made of wood, and Hurricane Agnes (1972) took it down to the Philadelphia Navy Yard!

Stonecliffee Park and the restroom building have been frequent targets of graffiti and vandalism. But the sense of service to the people remained in refurbishing the park and changing the attitude of people in the community.

In 2011, a mural was painted on each wall of Stonecliffee’s main building. The scenes depict biking, fishing, walking/jogging, boating, soccer, basketball, picnicking and the action park designed for skateboarders, BMX bikers and inline skaters. The mural designs incorporated input from public meetings and the community. 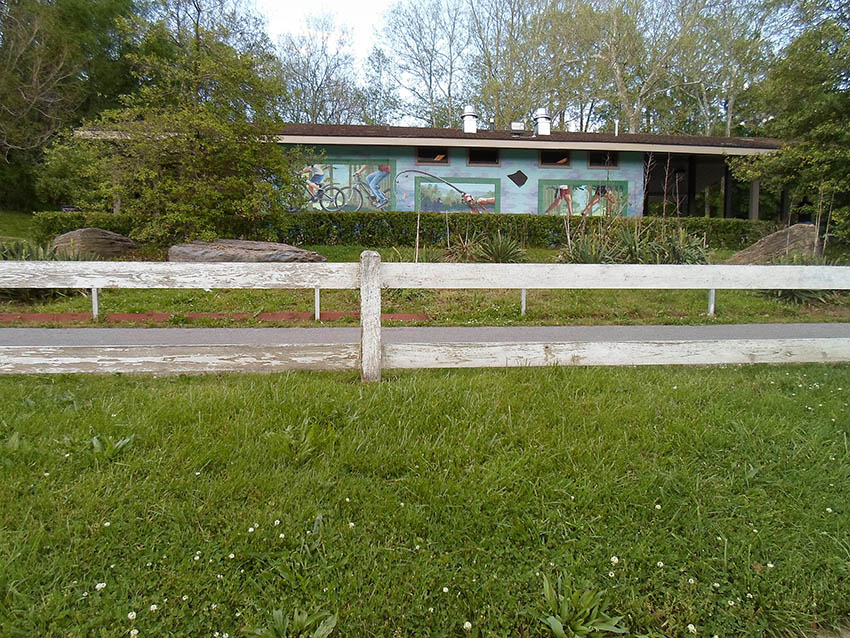 Today, Stonecliffee Recreation Area provides opportunities for family-oriented recreation and athletics. Facilities include an Action Park for skates and bikes, two volleyball courts, a basketball court, shuffleboard courts, and a combination football/soccer field. There is also a fitness station for both able-bodied and physically challenged persons. A centrally located children’s play area is adjacent to the fishing dock and picnic area.

Below: Stonecliffe Action Park – Click or touch Images to Enlarge.