The Reading Council, which would in time become the Daniel Boone Council, was established in March 1916, when Woodrow Wilson was president and World War I was underway in Europe. The United States would enter the war the following year, three years after it had begun and one before it ended. Meanwhile, in Reading, a group of Scouts and Scouters met in Council Headquarters, housed in the Reading Eagle Company building, at its former South Sixth Street location. George M. Jones was elected Council President, and Solon L. Parkes was named Commissioner. Jones’ position was volunteer, but Parkes was paid $125 a month, plus maintenance for his family while he was away at Scout camp.

Jones, who was a teacher at Reading High School, is on record as having been the first Scout in Berks County. Jones, as many other Scouts in the early days of the Boy Scouts of America, had been a Lone Scout, with no troop affiliation. During these early years of the BSA there were, in addition to Lone Scouts, several local troops of Scouts who met without benefit of a local Council. Jones had organized such a troop in 1911, as had Frank Miller, who was superintendent of the Reading Boys’ Home. The troops were chartered directly by the National Council of the BSA in New York City.

Local Scouts were active during these early years, even before a local Council had been established. A Boy Scout Camp was started at the Earlville Dam in southeastern Berks County in July 1911. There, Scouts enjoyed sunny days and advanced their camping skills and knowledge of the outdoors.

Below: The first Boy Scout Camp known to exist was set up at the Earlville Dam in July of 1911. 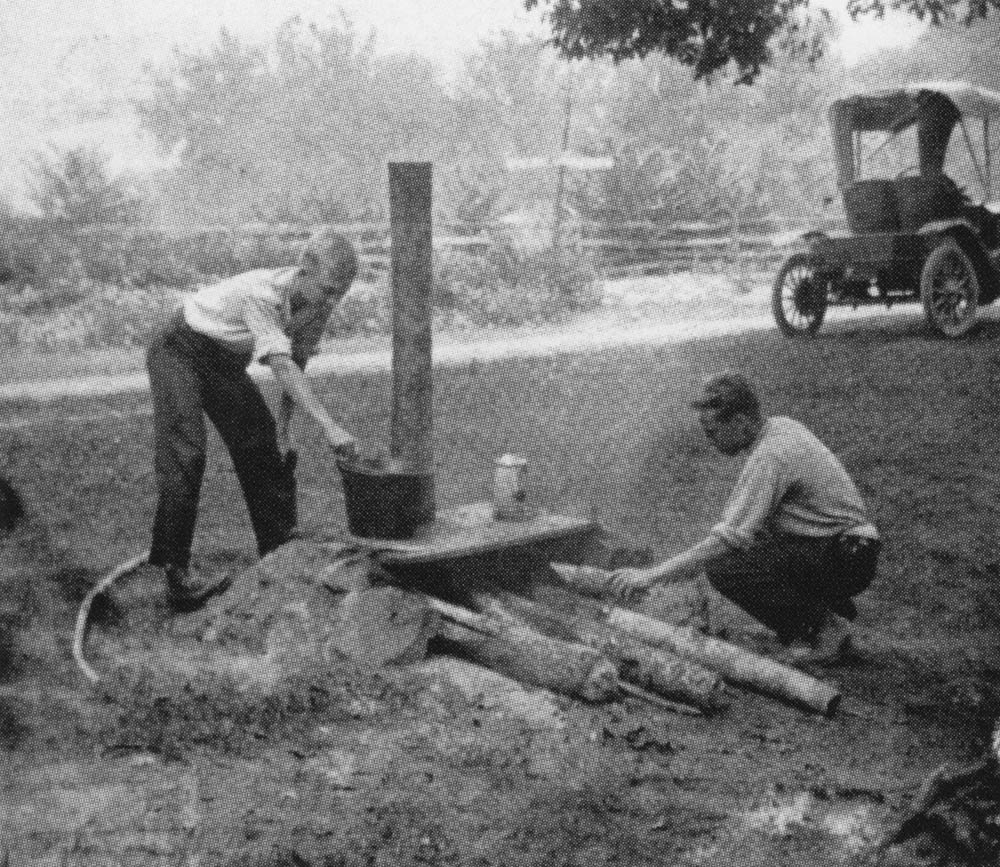 A second camp was set up in 1917 on the Baby Hill Farm in Antietam, and Parkes’ monthly salary was increased to $150. That same year, Council Headquarters were moved to a building at 522 Washington Street, which currently is home to a legal firm.

While Boy Scouts were meeting in various locations, a younger Wolf Cub group was organized in 1919 in Sinking Spring. The group employed the Wolf Cub handbook that Col. Robert Baden-Powell, the founder of Scouting, had written in 1916 and the BSA was promoting.

Below: Scouts and Scouters meet at the first annual banquet of the Reading Council in 1916 at the Mansion House in Reading. 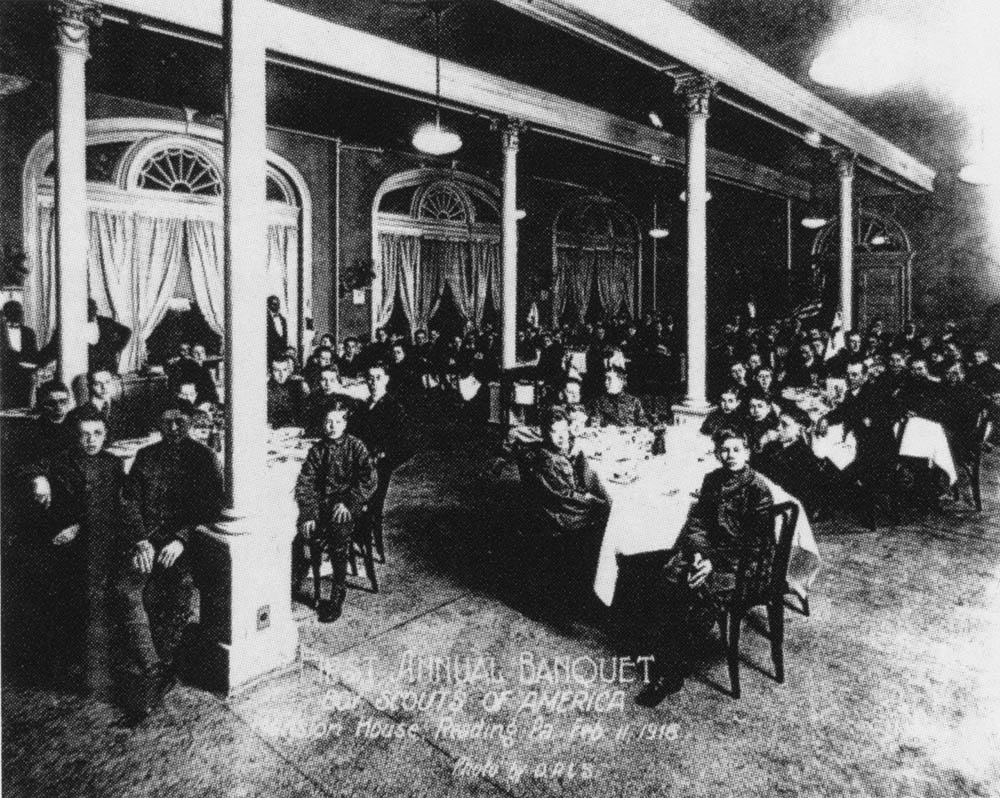 Still another camp opened in June 1919 after the Reading Council purchased a tract of land at Indiandale, located south of Wernersville in Vinemont on the western side of Berks County. To better reflect the area in which its troops were located, the Reading Council in 1919 changed its name to Reading-Berks County Council, and its headquarters were again relocated, this time to the Thrift Building on the southeast corner of Sixth and Washington streets in Reading.

There was tremendous excitement among the troops of the Reading-Berks County Council when, in 1921, James E. West, Chief Scout Executive of the BSA, made his first visit to Reading. Scouting momentum was running high, and, inspired by West’s visit and other events, the Council in 1922 released the inaugural edition of its newsletter, The Scout. The September 1922 edition featured a story about a visit to Reading the same month by National Scout Commissioner Dan Beard, who presented merit badges to local Scouts who had attended camp and earned the badges. All local troops participated in a parade prior to the ceremony at Reading’s Boys’ High School.

Below: A 1921 First Class Certificate for Reading-Berks County Council. 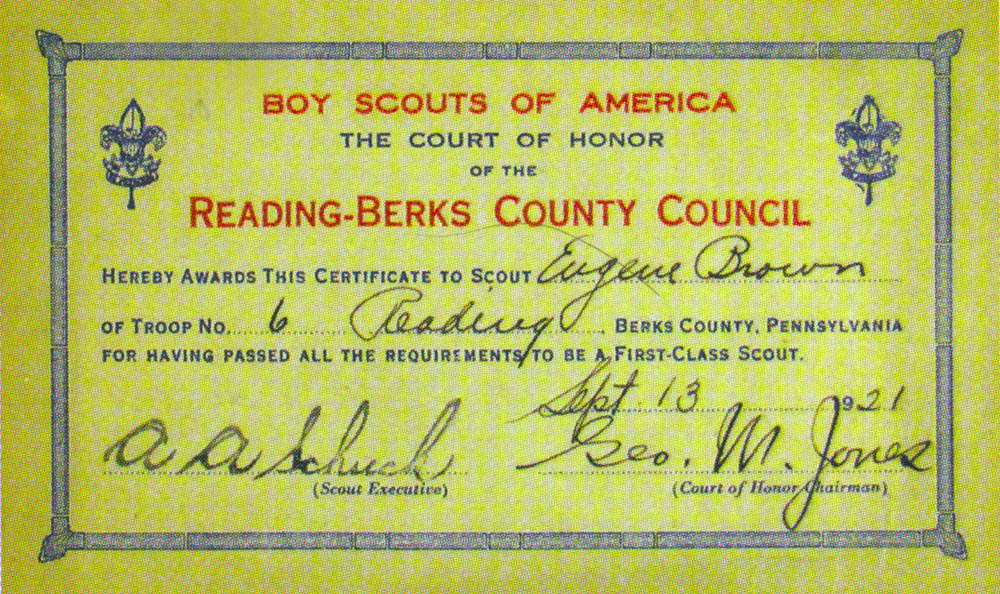 Scouts within the Reading-Berks County Council were disappointed when, in 1925, the State Forestry Department ruled that boys under the age of 16 were not allowed to participate in forest fire duty. The Council reported that “the boys like this work and are disappointed, but play the game like true Scouts.” To keep Scouts active in fire prevention, the Council created a forest protection program in which they could have an impact without actually fighting fires. Their duties included: placing fire protection posters, reporting fire hazards, destroying tent caterpillars and employing other conservation measures.

Council headquarters moved to its fourth location in 1926, when it relocated to the Friends Meeting House on North Sixth Street, next to the Rajah Temple. Quakers had long played an important role in this part of Pennsylvania, and Daniel Boone had been born into a Quaker family and attended Friends meetings as a boy.

The Scouting movement was firmly established in Berks County by this time, with more than 1,000 boys participating in more than 50 troops. Indeed, Scouting had become a national phenomenon, and was generally recognized as a force for the good. President Calvin Coolidge is credited with saying, “No single movement has been of greater advantage to our national life than the Boy Scouts of America,” and he was not alone in his admiration of the Scouting movement in America. According to The Boy Scouts’ Year Book, President Theodore Roosevelt also praised the organization.

“The Boy Scout movement is of particular importance to the whole country. It has already done much good, and it will do far more, for it is in its essence a practical scheme through which to impart a proper standard of ethical conduct, proper standards of fair play and consideration of others, and courage and decency to boys who have never been reached and never will be reached by the ordinary type of preaching, lay or clerical…. I heartily wish all good luck to the movement,” Roosevelt said.

Yet another American President, William Howard Taft, who was a Boy Scout himself, said he shared pride with all boys who were members of the organization.

“Boys, you and I are members of the same great organization, and, I am very proud of my membership, as I’m sure you are,” Taft said. “You have demonstrated that you are prepared, and efficiently prepared, to render aid to others who may be greatly in need of assistance. This is the great underlying purpose of the Boy Scouts of America.”

Scouting in Berks County continued to increase in popularity, with more than 1,300 boys registered in 1930. There also were Cub Scout troops by that time, in which boys nine through 12 were encouraged to participate.

Later that year, during the midst of the Great Depression, Indiandale Camp was sold at sheriff’s sale, leaving Council without a permanent camp site for the next eight years.

A group of Rotarians bought the camp and attempted to rent it back to the Scouts for $1,000 per year, but the arrangement would turn out to not be financially viable.

Meanwhile, there was much activity otherwise within the Reading-Berks County Council, which in 1937 announced that it would change its name to Daniel Boone Council in honor of the great pioneer who was born in Berks County.