The model of Old Ironsides represents the locomotive as it was originally built. The cylinders were 9 ½” x 18″ and the two rear or driving wheels were 54″ in diameter. The entire weight of the engine was about 12,000 pounds.

Matthias W. Baldwin entered a Matthias W. Baldwin jewelers’ and silversmiths’ firm in Philadelphia in 1817, and later opened a similar business of his own. In 1825, in partnership with David Mason, a machinist, he turned to the manufacture of bookbinders’ tools and cylinders for calico printing. When a stationary steam engine, which was bought for his business, proved unsatisfactory, Mr. Baldwin built another engine which was unusually compact in design and was especially adapted to meet the requirements of his shop. This engine and a small model of a steam locomotive, built later, established him as an ingenious mechanic.

His career as a builder of railroad locomotives began in 1832, when the Philadelphia, Germantown and Norristown Railroad ordered a locomotive for use on its line from 9th and Green Streets, Philadelphia, to Germantown, Pennsylvania. Mr. Mason had retired from the partnership, and Mr. Baldwin undertook the job of building the locomotive. It was delivered in November, 1832, and christened Old Ironsides. It was built under such great difficulties that, after it was completed. Mr. Baldwin is reputed to have said, “this is our last locomotive.”

The tender of Old Ironsides was merely a four-wheeled platform with wooden sides encasing an iron, box-like water tank.

Horses furnished the motive power from the official opening of the Philadelphia, Germantown and Norristown Railroad on June 6, 1832, until Old Ironsides arrived on the road. On Friday, November 23, 1832, the locomotive was successfully tried, and on the following Monday it was put into regular service, replacing some of the horse-drawn passenger trains. However, a public notice of that event reads. “. . . the locomotive . . . will depart daily, when the weather is fair . . . and ears drawn by horses will depart … at the hours when the weather is not fair.” Records indicate that Old Ironsides was used on the Philadelphia, Germantown and Norristown Railroad until 1846, when it was apparently sold. The Public Ledger (Philadelphia), dated January 18, 1869, notes the “…engine is still in existence in Vermont.” Its subsequent history is in doubt. 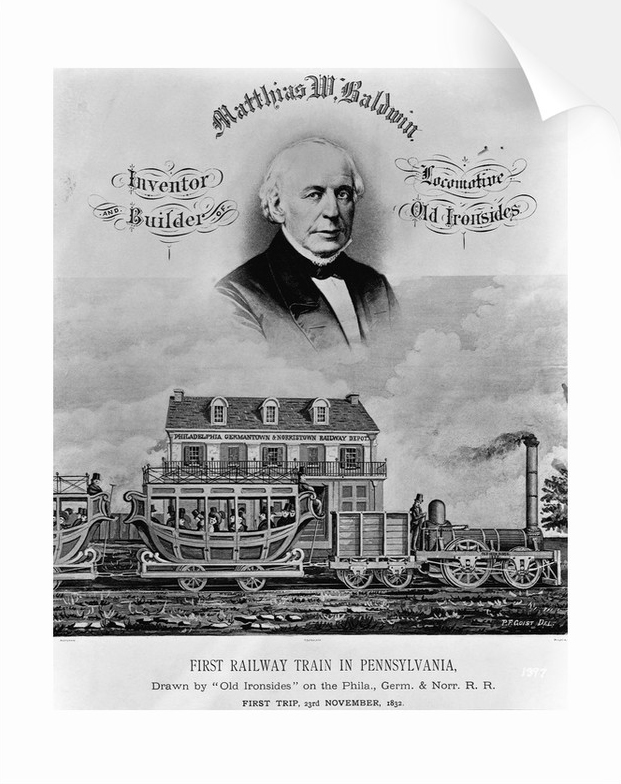