The northwest corner property at Sixth and Penn Streets of former Outlot No. 8 of the original town plan of Reading was originally sold by the Penns in 1749 to John Epler. Two years later John’s brother Adam was listed as owner. In all probability it was during the time Adam or his son Jacob had the property that a modestly sized two-story frame and brick tavern was erected. Close by the high steps leading into the hostelry was a sign that had a green tree painted on it. This swung atop a pole and indicated to a passersby that this was the Green Tree Tavern.

Below: Outlot No. 8 of the Original Town plan of Reading. 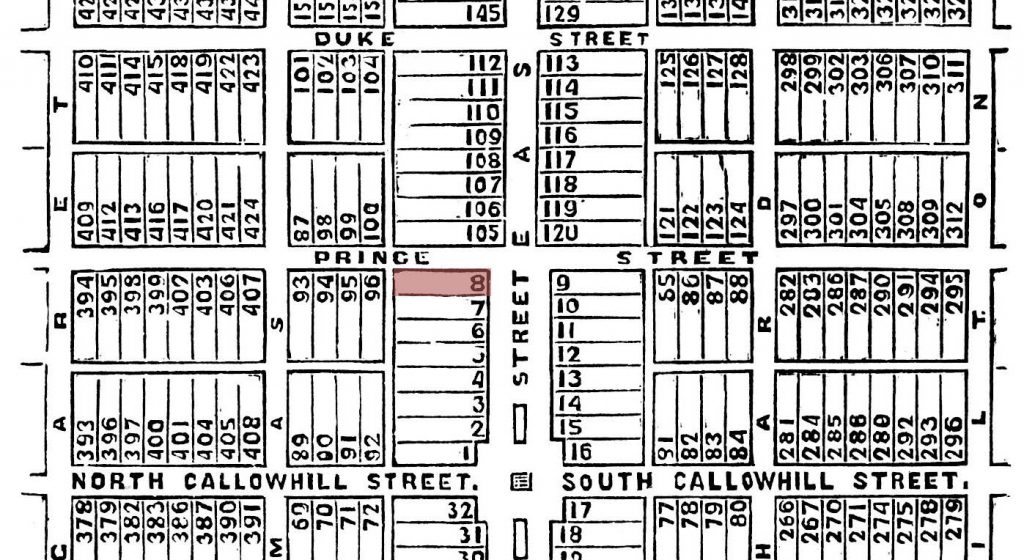 After successfully operating the Spring Forge in Earl Township for two years, Tobias Barto came to Reading and bought the Green Tree from Jared Epler on April 1, 1845, for $8,000. Records indicate he “rebuilt” the place. In an “enlarged condition” it was renamed “Keystone House” in honor of a military unit to which he was attached.

Below: The Keystone House. 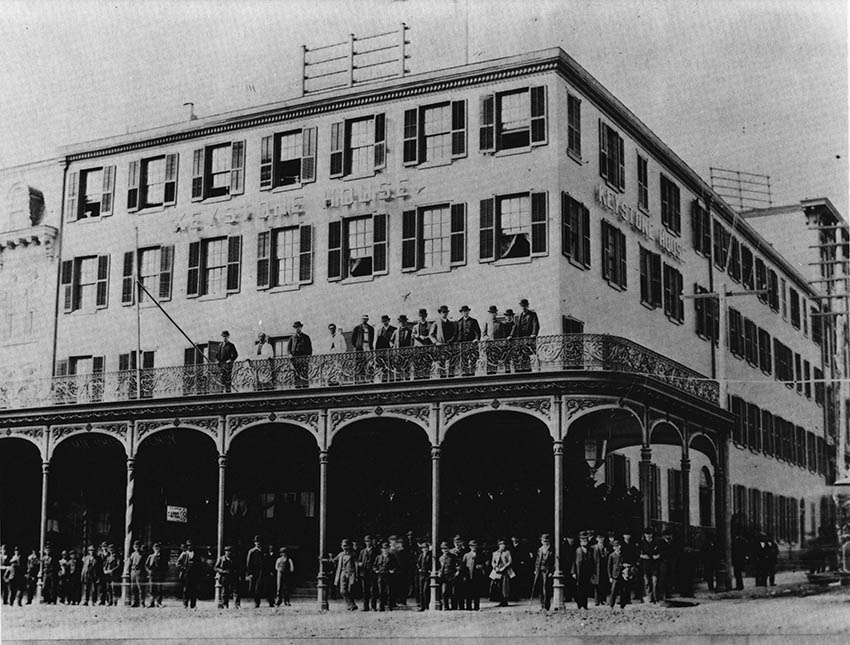 The Keystone House became an important gathering point. In 1851 the first Berks Agricultural Society was organized here, by Barto and others. In 1854 Barto built “Keystone Hall” (behind his hotel) for public meetings, theatrical presentations, balls, and fairs. It opened in July with a capacity for 500 people. On Dec. 22 of the same year Keystone Hall was the setting for a “Grand Illumination Ball” that ran throughout the night, in celebration of the first gas lighting of streets within the town.

Here, too, operas and musicals were presented. Christy’s Minstrels appeared in 1860 and 1865. No less a personage than the well-known composer and pianist Louis M. Gottschalk graced the stage on April 4, 1863.

In 1865 the Keystone Hotel came into the possession of the Bushong brothers, Jacob and Henry, who were bankers with interests in mining, iron and paper manufacture, distilling and real estate.

At no time did the Bushongs actually run the hotel business. Subsequent owners followed suit and leased the premises to others for actual operation. Some landlords who followed soon after Barto (and might be familiar) were Joseph Ganser who in time built the Highland House on Neversink Mountain above South 13th Street, Eli S. Fox who also owned the Reading Terra Cotta Works, and Fox’s son-in-law, George K. Whitner, who was a brother of merchant C. K. Whitner and a brother-in-law to one of the Bushongs.

In 1883 the hotel complex was purchased by the Penn Mutual Life Insurance Co. and the name was changed to “Hotel Penn.” At this time there were 104 “sleeping compartments” supplied with electric annunciators and steam heat. A restaurant in the basement furnished meals at all hours. 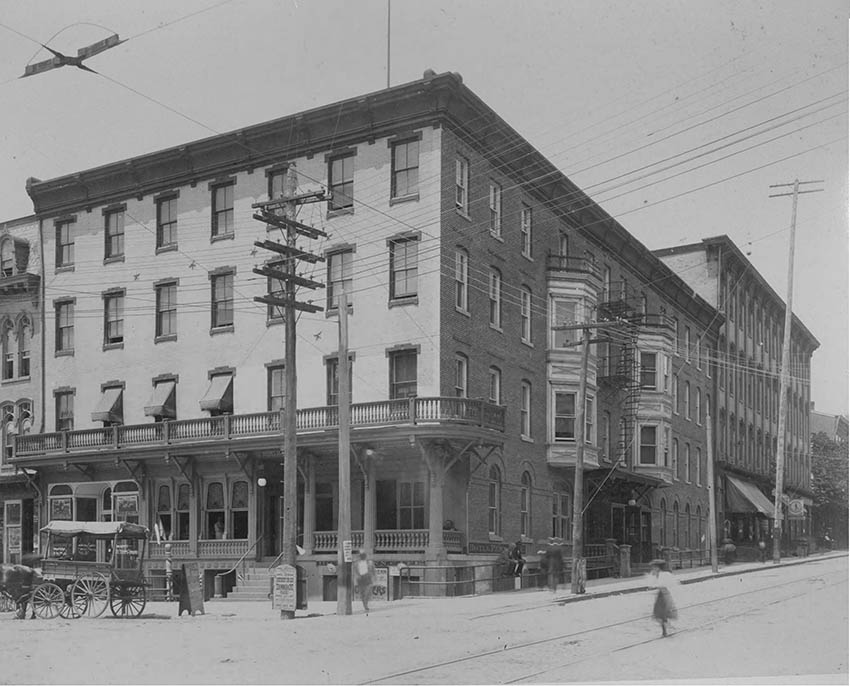 Closing of the barroom during Prohibition and lean Depression years had much to do with the eventual downfall of the enterprise. The Milner Corporation leased the property in 1934 and changed the name once again to “Milner Hotel.”

Its remaining years mirrored the general weakening condition of downtown Reading during the same period. By the mid-1940s the old hotel was in a sad state. With decreasing revenues fewer repairs were made, with the result that in 1948 the top three stories were closed because of a fire hazard.

Below: Northwest corner of Sixth and Penn Streets, early 1950s. 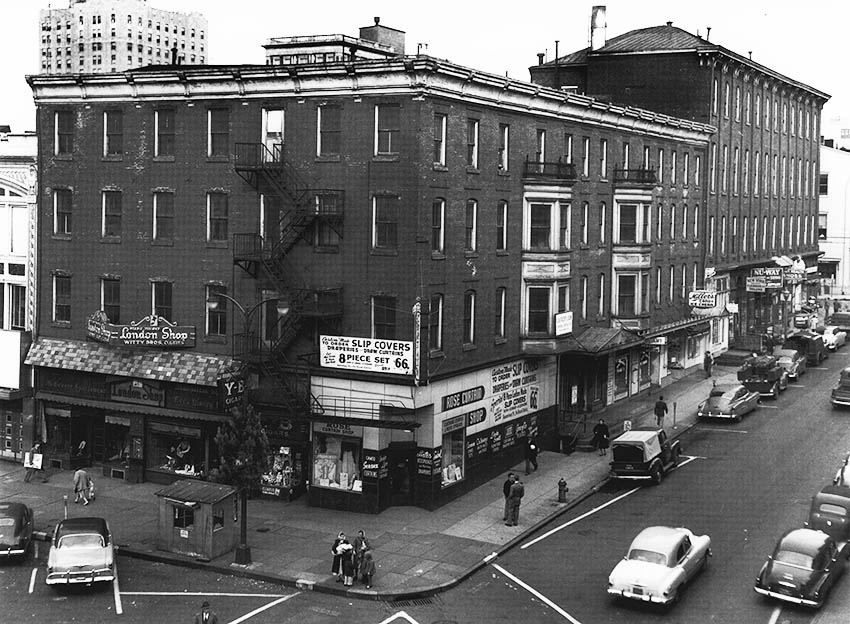 In 1953 the top three floors were removed from Penn Street back to Court Street due to structural issues. The remaining first floor is what you see today. 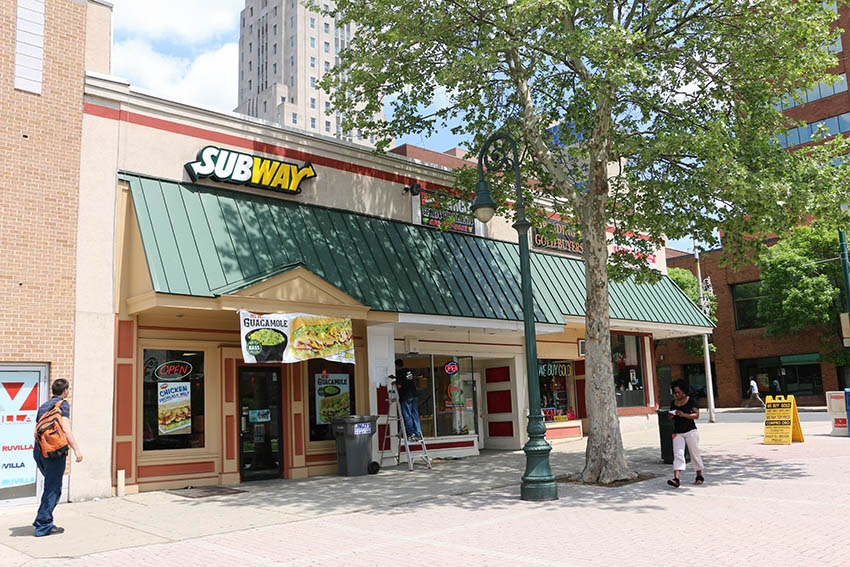