Egelman’s Park, about 30 acres, along the west side of Hill Road (above Angora Road), was once one of the “beauty spots” of the Reading Park system. It owes its beginnings to Egelman’s Springs, which was once a source of water for the city starting around 1838. 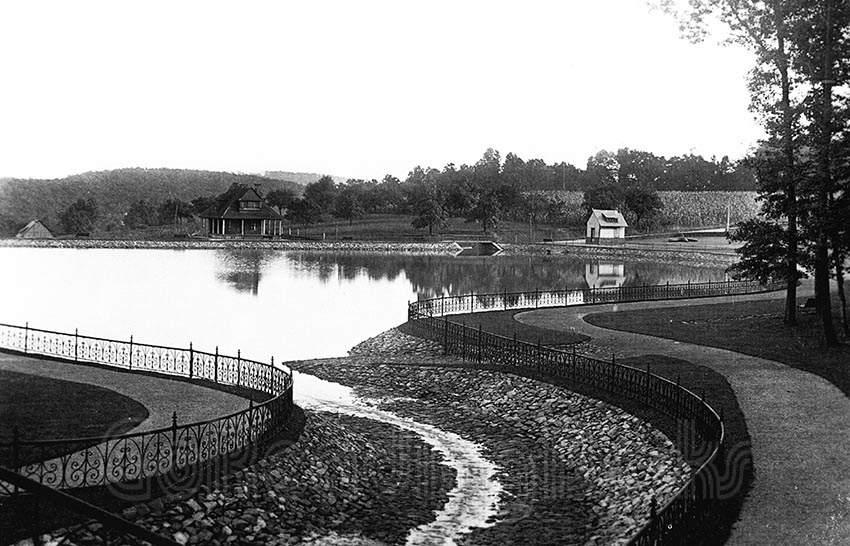 Egelman’s Springs are supplied from the same source as the Hampden Springs which supplied the Hampden Park Reservoir, but they issue from the opposite or eastern side of Mount Penn, and at a greater elevation.

The Egelman source is yielded from a surface area of six-tenths square miles high up in the mountain.

The Egelman reservoir, 441 feet above Fifth and Penn streets and 49.2 above the Buttonwood street reservoir, had a capacity of 6,990,000 gallons and furnished 1.78 per cent, of the city’s supply during the year. This water was filtered at the rate of 500,000 gallons per day.

The water is collected in a reservoir. The surface area of the water is 2-4/10’s acres. The pond is formed by earth embankments built across the valley of the stream, one embankment being contiguous to Hill Road and the other at right angles to it. The inside slopes of the reservoir are both of stone. The embankment contains a stone masonry core wall. The overflow from the waste weir passes through a thirty-six inch brick drain laid in Hill Road to a natural water course. The stream, known as Rose Valley Creek, then has a rapid descent and its course is through a public reservation known as Mineral Springs Park owned and maintained by the city.

Immediately above the reservoir there is a subsidence basin, small, built in the same manner and being about one-half the size of the storage basin. 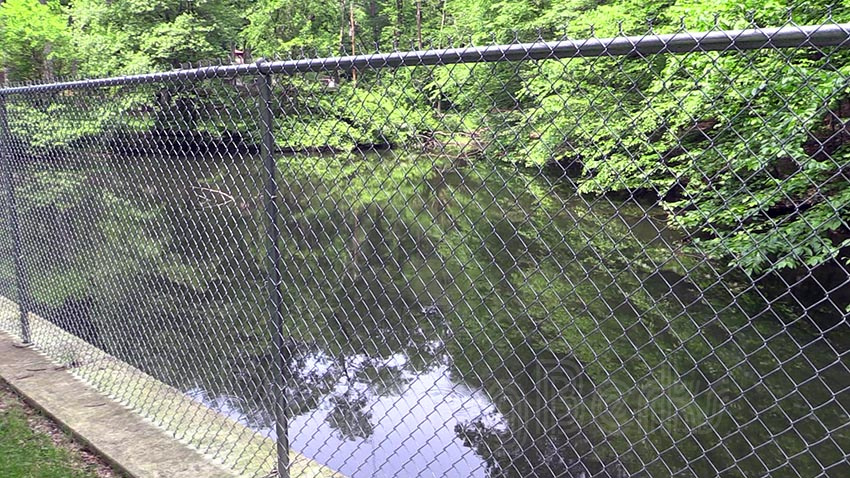 Water flows into it from the main stream and also by means of an open ditch gathering the surface wastes from the boulevard and the district west of the reservoir. Pipe connections are so arranged that subsided water may be delivered directly to the filter plant below.

On Hill Road opposite the reservoir are located the Egelman filters. The capacity of this plant was five hundred thousand gallons per day. It has been in successful operation since June eleventh, one thousand nine hundred and three. Prior to that time the water was supplied in its raw condition to the town, the service being in use when the city acquired the waterworks in 1865 for $300,000.

Below: Water flows under Hill Road from reservoir to filters. 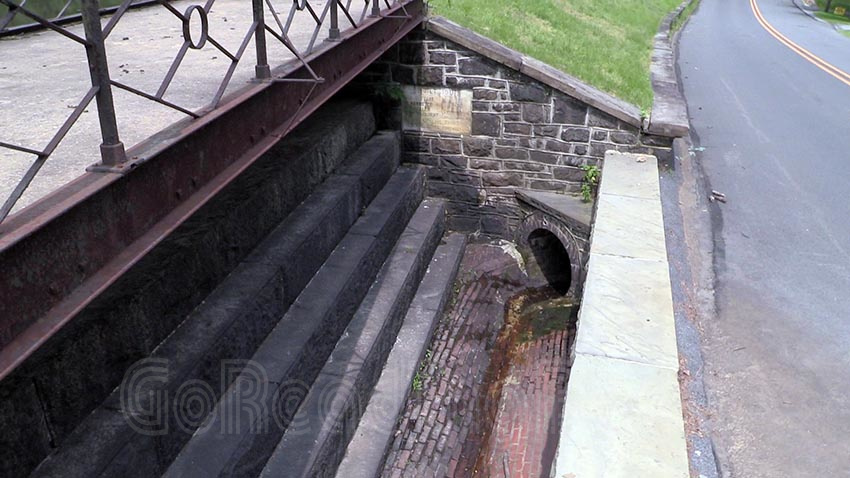 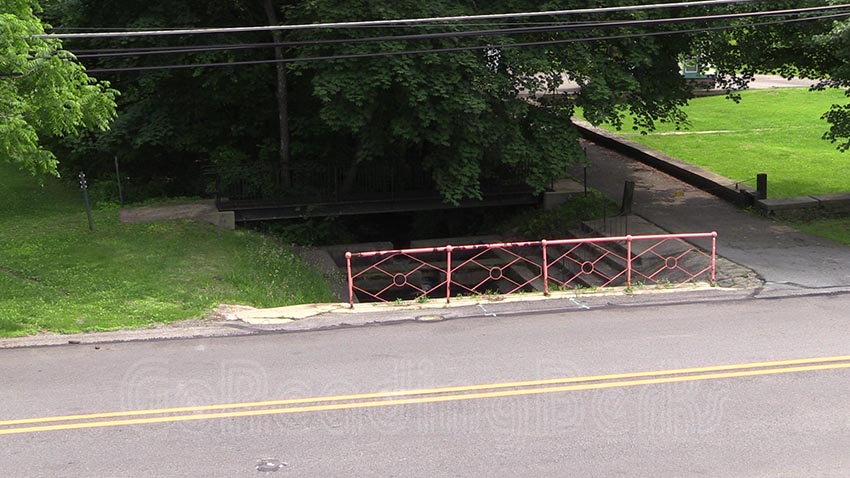 There are two filters built side by side, each 40 feet wide and 55 feet long and 9 feet deep. Filtered water is conducted to the clear water basin which is a masonry structure 12 feet by 15 feet, interior dimensions, and 10 feet deep. The supply pipe to the city begins at this basin.

On the watershed adjoining the city property there is a picnic ground, about one acre, where several hundred people once gathered on special occasions.

Egelman’s reservoir was officially abandoned and turned to park purposes in 1935. The pollution of the water was seriously threatened by the offal and refuse of a great number of outing parties held on the drainage area, particularly on Sundays.

In Oct. 2018, the state Department of Environmental Protection told Reading officials that two dams at Bernhart’s and Egelman’s need to be drained because of safety concerns. 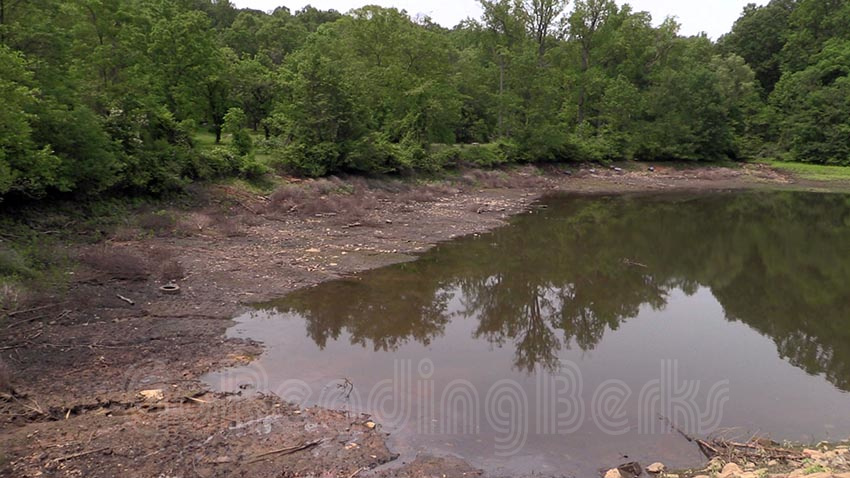 An area of seepage at Egelman’s was observed at the lower dam masonry wall that runs along Hill Road. The displacement of several blocks also indicated that outward dam movement may be occurring.

In addition, the lower dam brick masonry outlet pipe located to the south of Hill Road has several bricks missing from the bottom of the pipe. The bricks serve a critical function of load distribution in the pipe and are in need of replacement or repair.

Egelman’s Lake was drained until repairs could be made.

Over time the park has fallen into serious disrepair. Chronic underinvestment in the city’s parks has left them with a wholly insufficient level of maintenance, resulting in a boom-and-bust cycle that ends up costing the city more. 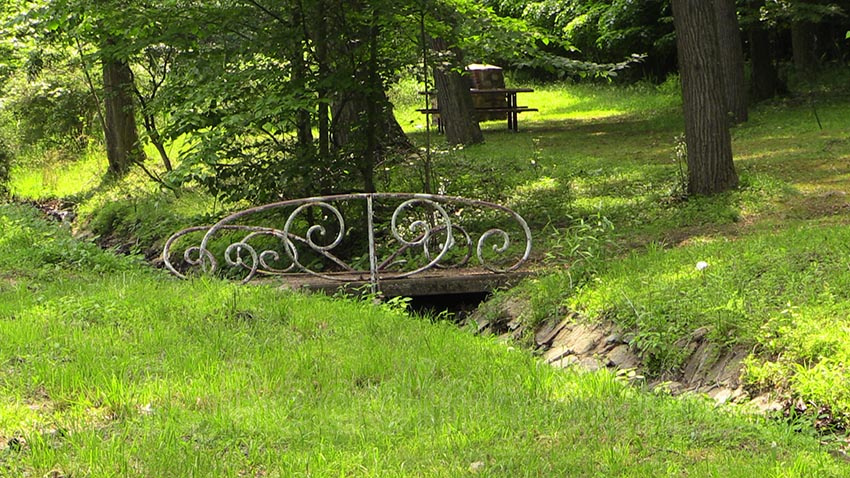 In 2020 Pennsylvania awarded the City of Reading a $350,000 H2O grant to modify Egleman’s Dam in Reading . State Sen. Judy Schwank joined Reading Mayor Eddie Moran for the announcement at the city-owned Egelman Park.

“This state investment in our city will help my administration continue our efforts to improve one of our most scenic parks and our wastewater system for the benefit of all city residents,” said Reading Mayor Eddie Moran.