Saint Michael Convent began as a “seminary for young ladies,” established and conducted by the Sisters of the Immaculate Heart of Mary. The fifty acre hilltop tract and the building were the result of a pious bequest in the will of Henry Felix, a wealthy Reading shoe manufacturer.

Archbishop Patrick John Ryan dedicated Mount Saint Michael’s Seminary for Ladies on September 28, 1895. Father P.J. Mellon, Pastor of St. Joseph’s Parish in Reading, was instrumental in the establishment of the institution. Father George Bornemann was present for the dedication Mass and ceremonies. The seminary, located high on a hill approximately two miles outside of Reading, consisted of three floors, each with 12 rooms. The seminary for young ladies was open to women of all faiths. Mother Ephraim was in charge of the seminary with the assistance of several sisters.

Below: St. Michael’s Seminary building as it appeared in the late 1890s. A a brick wing was erected in 1921 to the left side. 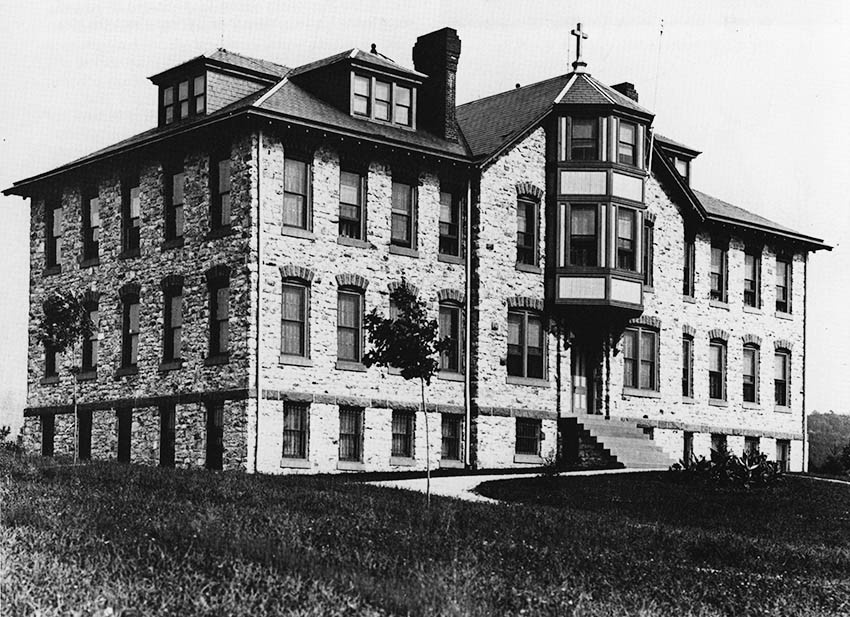 After 13 years in Hyde Park, the Immaculate Heart Sisters abandoned the mission. In the archives of the Immaculate Heart Sisters, it appears that the last graduation at the seminary occurred in June 1908, and that sometime before the end of that year they left Hyde Park. The seminary appeared to be doing well, and it is unclear why the I.H.M. community left this mission. What is clear, however, is that for a couple of years, the site was not occupied.

Father Bornemann administered these buildings and land in Hyde Park. Always looking to help others, Bornemann wanted to establish a facility to assist women religious with tuberculosis, and personally financed the cost to convert the facilities in Hyde Park into a sanatorium for tuberculosis patients. This benevolent act was an expensive endeavor at a cost of over $30,000, but Bornemann felt it important to found a treatment facility for female women religious who were stricken with. The land in Hyde Park was an ideal location for this purpose, sitting high on a hillside just outside the city, and surrounded by trees and nature.

To operate such a facility, Bornemann sought the assistance of the Missionary Sisters of the Most Sacred Heart of Jesus (M.S.C.), who were founded in Hiltrup, Germany. The Missionary Sisters of the Sacred Heart of Jesus are a religious community from Germany founded in 1899 by the Reverend Hubert Linckens. The order became known as the M.S.C. community, Latin initials for Missionaries of the Sacred Heart. The community wanted to establish convents in the United States to serve the needs of an ever-growing immigrant population, many of whom had a German heritage. The M.S.C. Sisters first missions in the United States were in two Slovak communities in Lansford, PA and Slatington, PA in 1908.

As the religious community searched for a motherhouse in the United States, the location in Hyde Park was a match. The community was in need of a motherhouse and Monsignor Bornemann was looking for sisters to staff the facility. The buildings and land were subsequently given to the M.S.C. Sisters for the purpose of operating the sanatorium and establishing a Provincial Motherhouse in the United States. Thus, in 1911, several sisters relocated to Hyde Park to prepare the facility for tuberculosis patients. One year later there were 65 sisters living at St. Michael’s Convent. After a few years, the sanatorium closed and the M.S.C. Sisters used the facility as a provincial motherhouse, a novitiate, and a high school for girls. The M.S.C. United States Province serves both the United States and Mexico.

Later, Father Bornemann acquired additional adjacent land by purchasing a farm for the Missionary Fathers of the Sacred Heart of Jesus to establish a seminary and monastery on the site. The order, both priests and sisters, grew quickly in the United States, and Hyde Park proved to be an ideal location for the monastery and the motherhouse.

In 1921 an addition was built onto the original building for a chapel and dormitory. In 1931 a high school building was added, much needed because St. Michael had become a novitiate for the training of nuns.

Below: An aerial view of Saint Michael Convent complex showing the approach on Seminary’ Avenue in the lower left corner. The 1931 high school building is in the upper right corner. 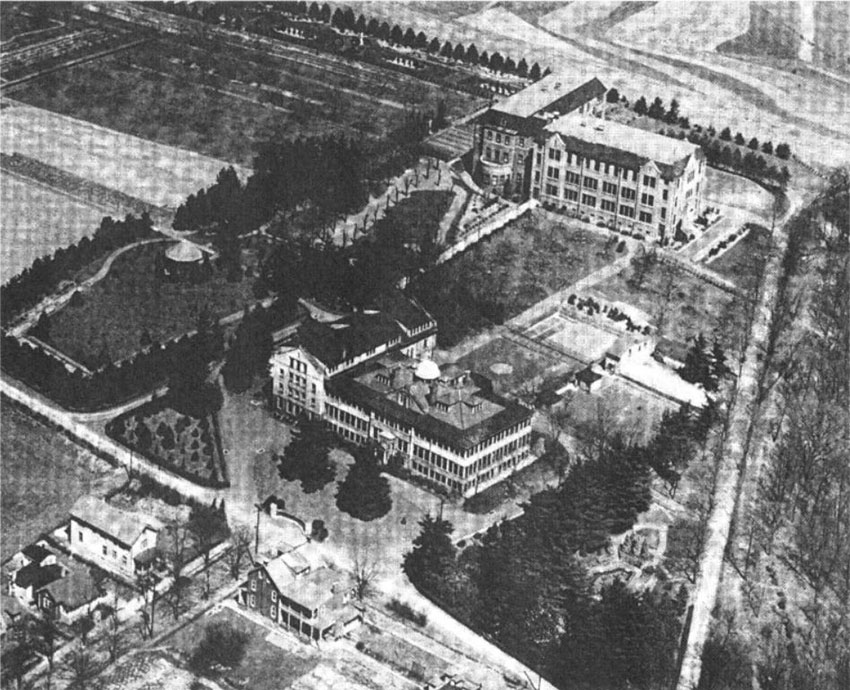 From the modest start, on land and buildings acquired by Father Bornemann high atop Mount St. Michael in Hyde Park, the American Province of the Missionary Sisters of the Sacred Heart of Jesus would serve the needs of thousands of students and parishioners in schools and parishes and in other ministries throughout the twentieth century. At Mount St. Michael’s, a girl’s academy and infirmary for the health care of sisters were established over the years. In 1955, a new facility was constructed at Mount St. Michael. The girl’s academy would eventually close in 1969. In 1973 members of the novitiate moved into the original building of St. Michael complex and the 1955 building was put to use for their general purposes. Major renovations to former novitiate and high school buildings resulted in offices and living quarters for members of the provincial government and an improved care unit for the growing number of aged and infirm sisters. The original building that was first used by the Sisters, Servants of the Immaculate Heart of Mary and was secured by Monsignor Bornemann, was torn down in 1998.

The Sisters created Sacred Heart Villa in 2003 with the vision of providing a personal care home for the Sisters and other seniors of southeastern Pennsylvania. Sacred Heart Villa incorporates the spirit, love and care that have been the foundation of St. Michael Convent, the Motherhouse of the Missionary Sisters.

With the dream of enlarging their mission of caring for the aged and infirmed, the Sisters began extensive renovations to St. Michael in order to create 35 personal care residential rooms.

When the renovations were completed, Sacred Heart Villa was born. The facility has two residential buildings, a remodeled dining room, a new fireside lounge, library, café and beauty shop. The chapel remains in the middle of the facility for it truly is the Heart of the community. Each new residential room provides an individual with privacy, safety and security in an environment of beauty and grace.

In 2008, the M.S.C. Sisters began a year-long celebration of their centennial year that culminated with the closing Mass on August 16, 2009 presided over by Bishop John Oliver Barres, Fourth Bishop of the Diocese of Allentown. The Mass was celebrated at nearby Holy Guardian Angels Church and was attended by over 100 sisters.