The Rainbow District of the city had a rather inauspicious start, though it later grew to house the seats of city government and education, and many major industries.

The area got its name from the Rainbow Fire Co. which was formed on March 17, 1773 as a volunteer fire department.

The company was organized in 1793, and by the time it moved near its present location at Eighth and Court streets in 1840 to serve the uptown area, it had 75 members and the best available equipment.

But it didn’t happen overnight. For the first few months of service, the Rainbow men could boast of only two leather water buckets and a basket to remove valuables from burning buildings.

Below: This Rainbow Fire Company building, which stood on the northeast corner of Eight and Court, was readied for occupancy on March 10, 1870. This facility has been replaced by a more modern engine-house. The 1877 hose tower was torn away in 1966 at the instigation of a Reading councilman who considered the 114-foot-high structure an eyesore. 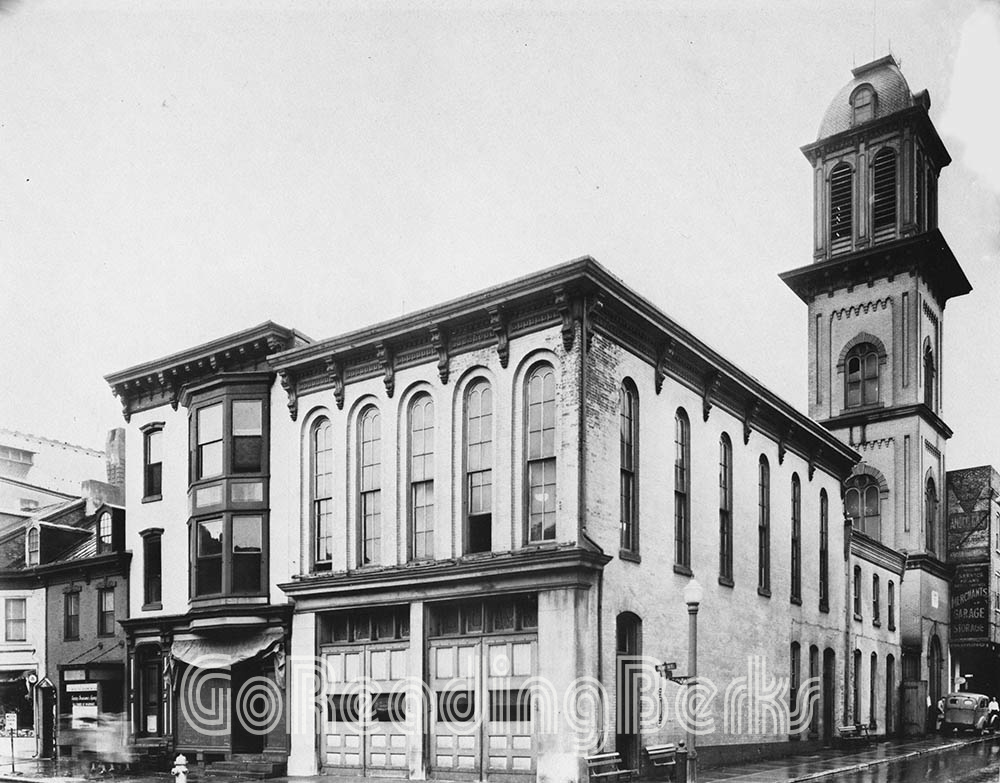 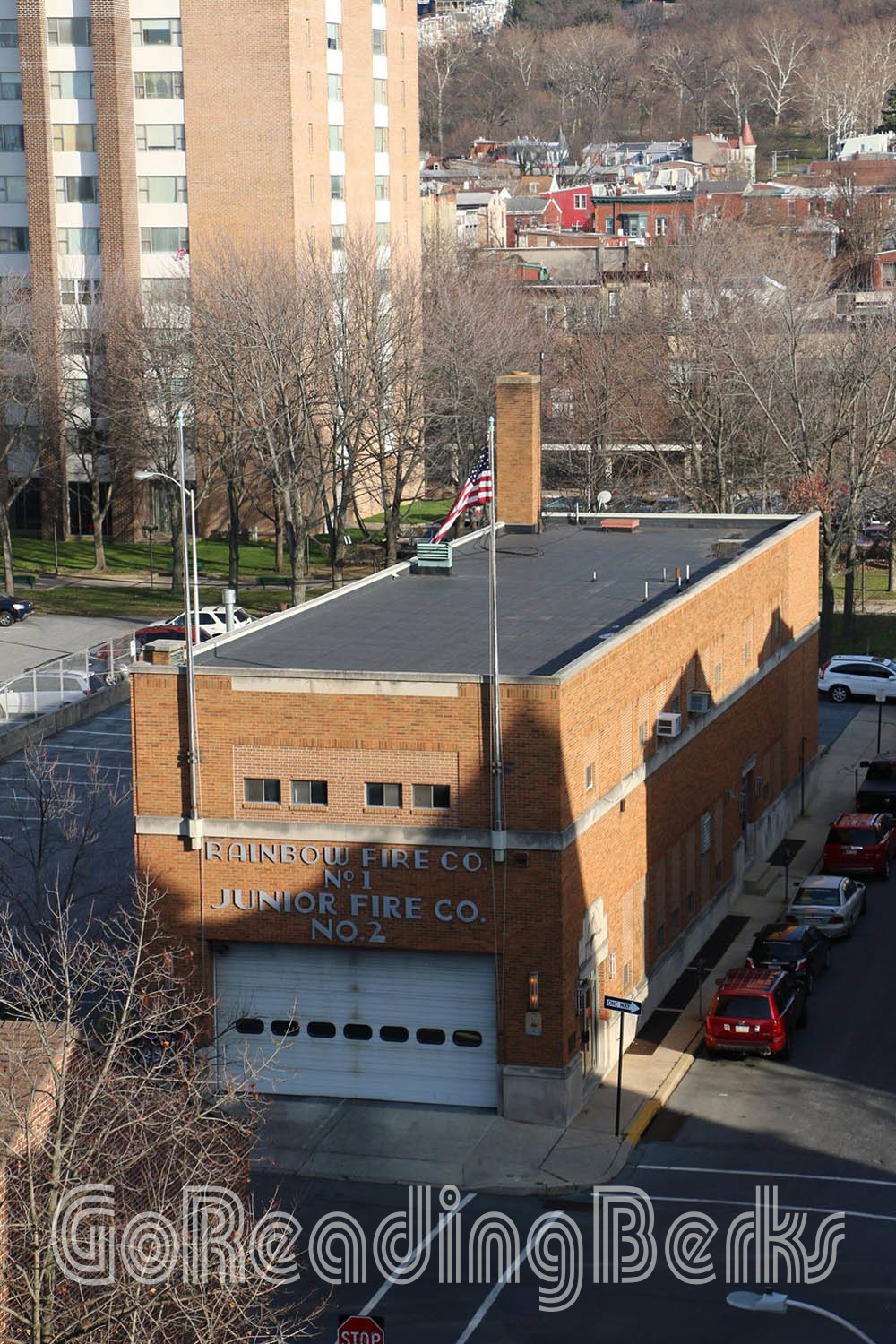 Most of the city’s colonial development was between Penn Square and the river, and the coming of the railroad tracks on Seventh Street in the late 1830s helped keep that development penned in.

The lots east of the tracks originally were sold by the Penns with 60-foot frontages and with requirements to build something on them within three years of the purchase.

That requirement was met, barely, with a series of small log and frame buildings constructed by property owners who mostly lived in the more developed western end of the city.

But the railroads also encouraged development, slowly but surely, of industries relying on rail transportation.

Starting with lumber and coal yards, that development later grew to include factories making cigars, paint and candy.

The area also benefitted from some finest clay soil in the city, suitable as a raw product for the handmade brick industry.

These brickyards were usually about a quarter-block in size, and would often move as development occurred, and most of the homes in the area were made from bricks made as close as next door.

This industrial development led to residential development. Much of the industry was on the half-streets – Cedar and Poplar – and the business owners built stylish homes on Eighth Street in front of their shops.

One of the factors which helped preserve the residential character of Eighth Street was the extension of North Ninth Street to Kutztown Road in 1869.

Eighth Street had been the connector, but the new Ninth Street provided a direct link from the White House Road which ran from South Ninth Street to Birdsboro and Philadelphia, to Kutztown and Allentown.

Major industrial development in the area centered on three industries. The A. Wilhelm Paint Company plant was built along the railroad behind the former Luden’s building on Eighth Street. The Wilhelm plant later moved to Third and Bern streets, and still later became part of the Glidden paint company. For a time after William Luden built his candy factory on Eighth Street in 1900, it existed side-by-side with the original Wilhelm plant, which must have provided quite a competition of odors.

Luden’s was launched by William H. Luden (1859-1949) in 1879 in the rear of his father’s jewelry shop at 35 N. 5th St., Reading, PA. His “factory” was his family’s 30-square-foot kitchen. An early product was “moshie,” a Pennsylvania Dutch (German-American) candy made with brown sugar and molasses.

In 1900, he moved to larger quarters on Eighth street beyond Walnut, where he erected a four-story brick building, expanded in 1909.

Below: Luden’s, northwest corner of Eighth and Walnut, stood as a testament to the success of the confections manufactured by William H. Luden. 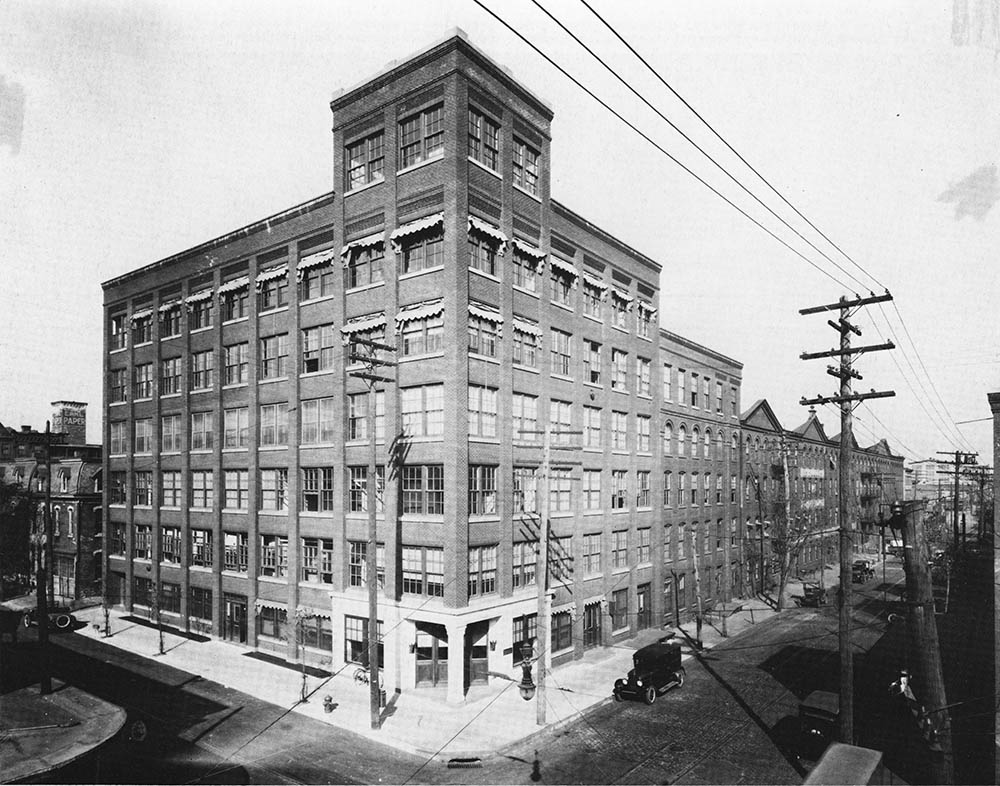 In 1893, the Yocum Brothers built their cigar factory at Seventh and Walnut streets, and added to it in 1902. In 1911, when almost 600 cigar makers were at work, a fire destroyed about a half-million La Cubana cigars. The Yocum building is still standing.

Below: Yocum Brothers Cigar Factory at 701 Walnut Street in Reading, Pa. at the Walnut Street overpass across the Reading Railroad circa 1900. (Warren-Ehret Company Photographic Collection). 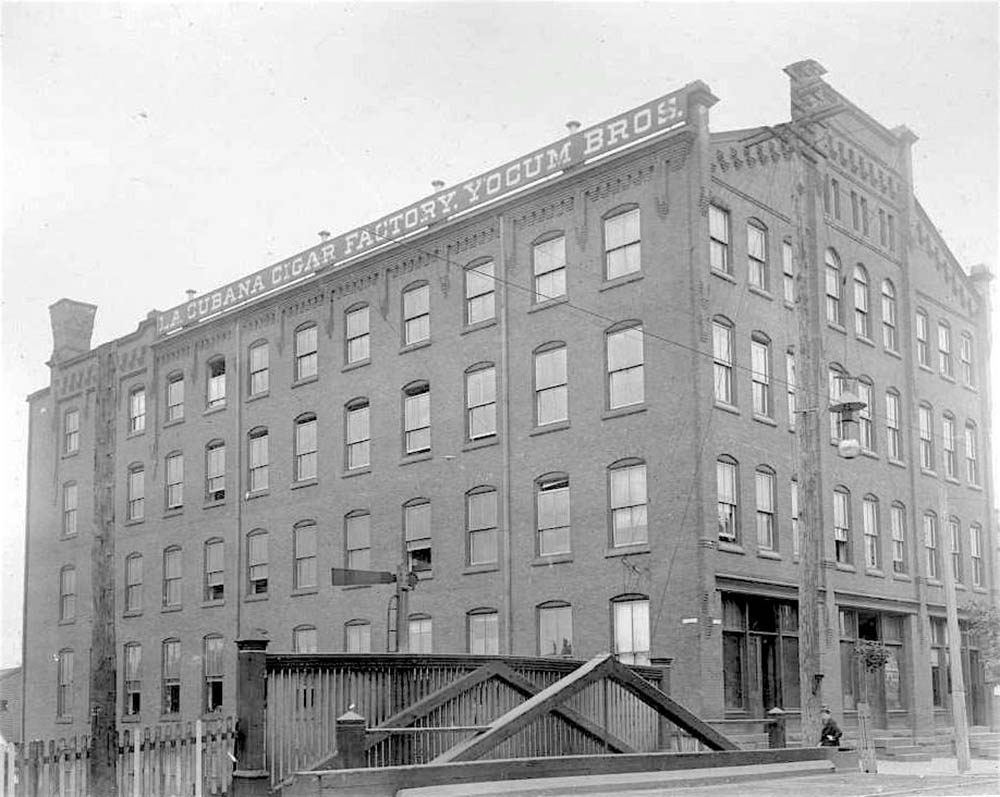 The Rainbow district also grew to house a large number of public buildings, starting with the first Boys High School built in 1881, three years after the decision was made to sexually segregate high school classes.

That building sat on the site now occupied by the Reading School District Administration building at the southeast corner of Eighth and Washington streets.

The second Boys High, built across the street in 1904, now houses City Hall. 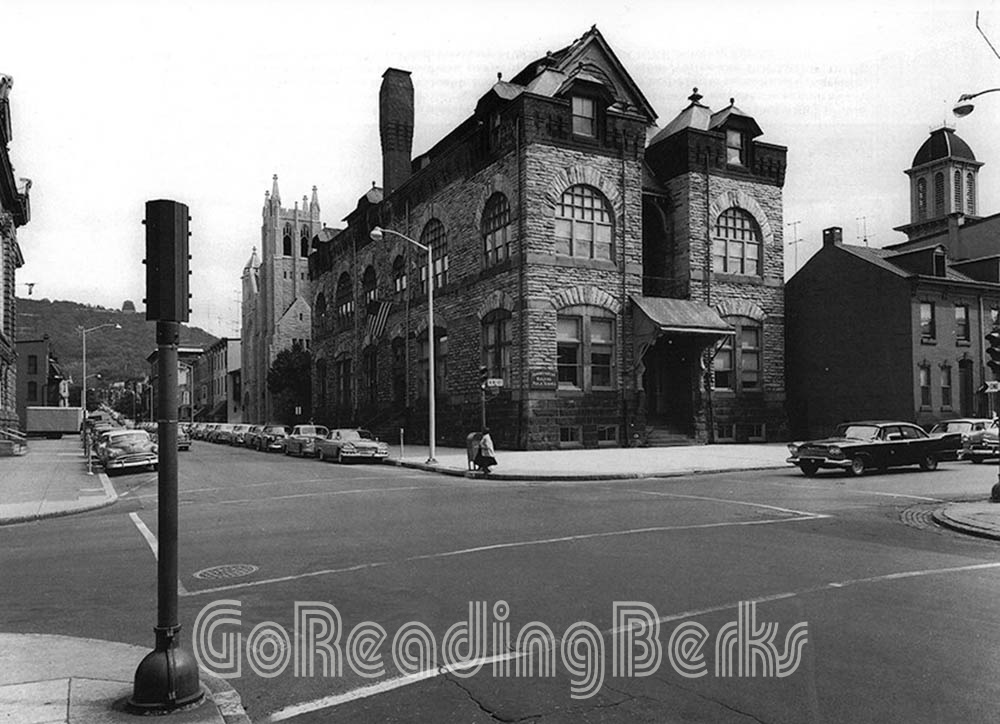 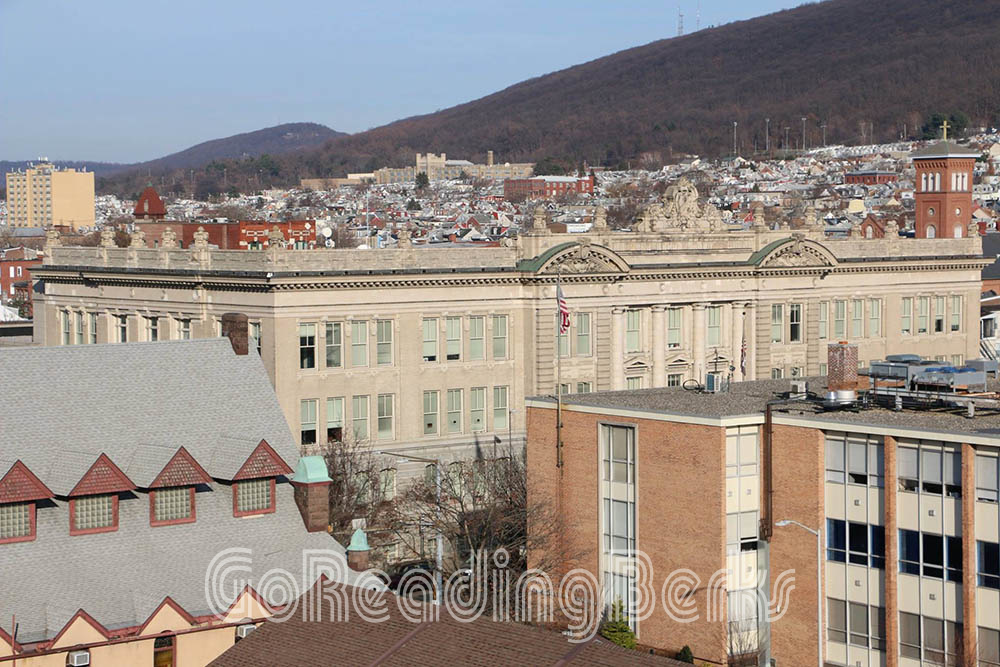 Below: The Red Men’s building still stands, used by the Police Athletic League. 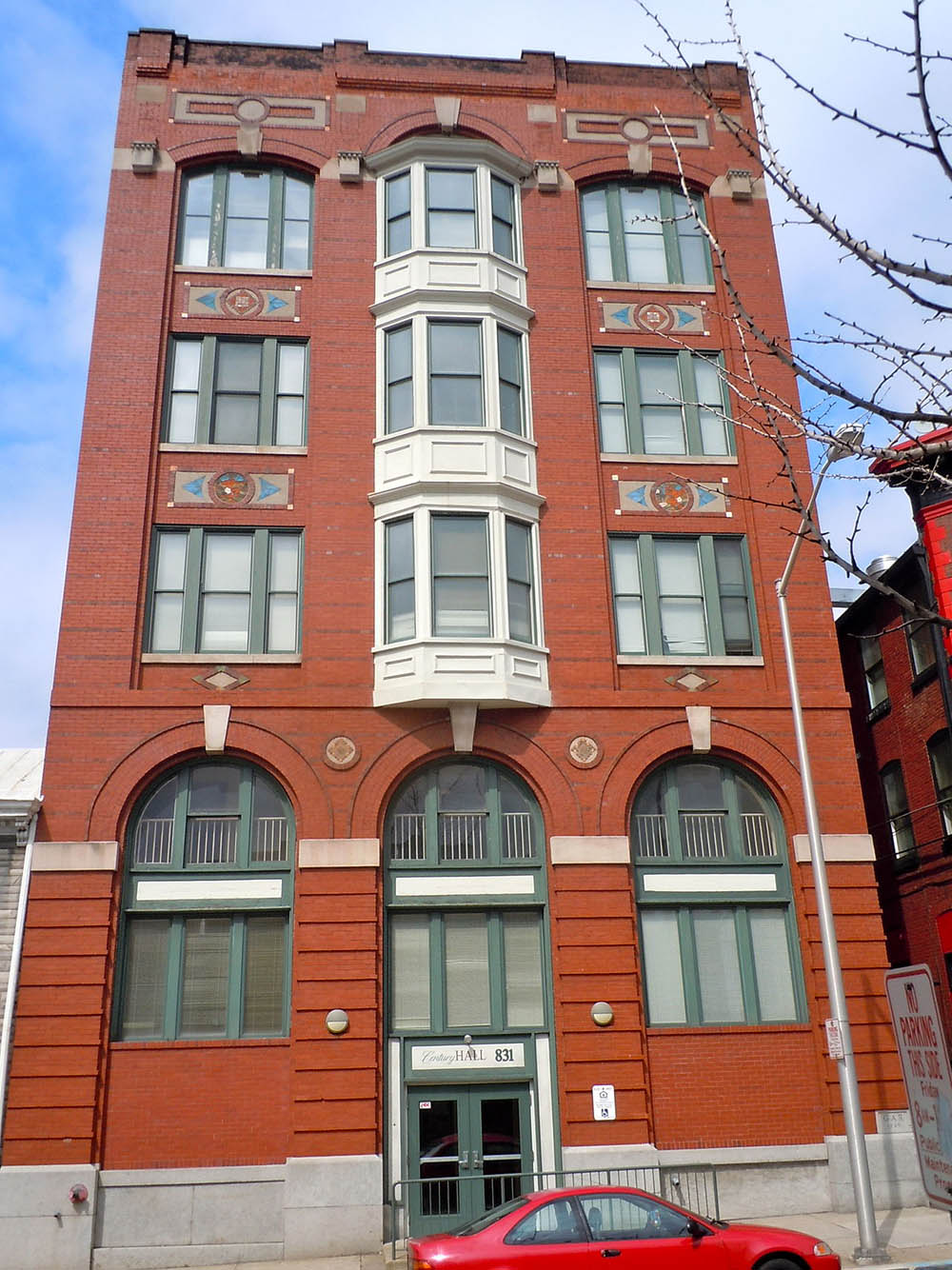