The Borough of Hamburg, located in the northeastern section of Berks County, is sixteen miles north of Reading. The land herein was taken up as soon as 1732, immediately after the territory had been released by the Indians and a patent was issued in 1772 to Martin Kearcher for 250 acres. The “tract” was at the time named “Hamburg.” In 1779, Kearcher sold to his son, Martin who laid out the town. It became publically known as Kearchertown, and was so called many years.

The building of the Centre Turnpike from Reading to Pottsville, was the earliest improvement in the place. This highway was finished in 1812 and operated until 1885, then abandoned. Stage coaches continued to run over this route until 1842. From 1815 to 1822 a canal was being constructed along the east bank of the Schuylkill River and opened for traffic in 1824. By 1895 so great had the railroad transportation come to obtain that the canal carried but little freight thereafter.

For forty years Hamburg was a great boat-building borough, but after the canal was leased to the Philadelphia & Reading railway, the demand was forever gone for such an industry. Hamburg had its railroad in 1842 from Philadelphia and Pottsville. The company built a good depot and made numerous local railroad improvements in the place.

Hamburg was made a borough by Act of the Assembly, passed April 3, 1837, after having tried it for a number of years. This was finally accomplished on account of the coming and completion of the canal and all the varied interests which it brought to the community.

A great flood calamity occurred in Hamburg and vicinity Friday P. M., August 3, 1906, the same causing a financial loss of more than $30,000. One third of the loss was sustained by the borough corporation, while the remainder was felt by the private property owners. This calamity was caused by a sudden down pour of rain which could not escape its natural channel and overleaping its bounds caused great disaster. One man was drowned— Allen J. Romich—trying to make his escape. The water pipes were broken and in drinking other water, before the usual supply could be obtained, a typhoid epidemic set in and carried away ten persons. 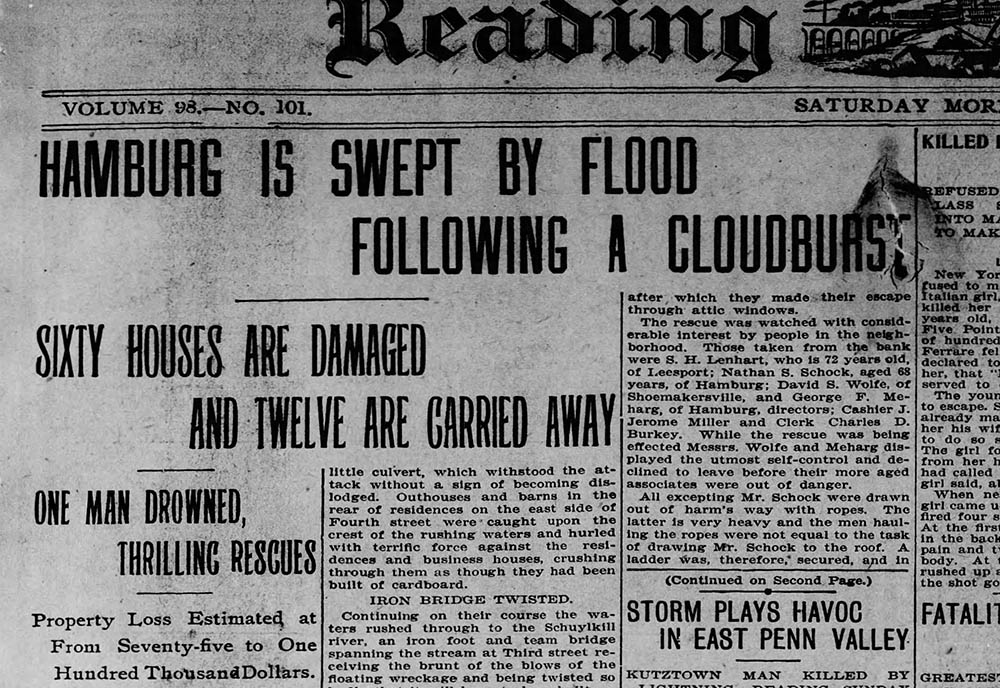