The Sinking Spring Drive-In, which opened in 1955, was the third in Berks to be built in the post-World War II heyday of America’s love affair with the car. When it was built by Fabian and Jay Emanuel Theaters, its owners said the screen, 86 feet high and 142 feet wide, was the largest in the world. It contained a 6,700-square-foot parking area capable of accommodating more than 1,000 cars. Located on the south side of Route 422 traffic driving eastbound on Route 422 from Wernersville could see the screen for nearly a half a mile away. There was a patio between the projection room and the concession stand where there were dances, contests and outdoor seating for the movies. On Tuesday, March 24, 1998, crews took a wrecking ball to the massive 1950s-era Sinking Spring Drive-In theater screen, once billed as the largest in the world, along Route 422 in South Heidelberg Township. Before it was razed, the site of the Sinking Spring Drive-In was used for a flea market on weekends. The site of the former Sinking Spring Drive-In was used for the construction of more than 85,000 square feet of retail space, including a 51,000-square-foot Redner’s.

The former Reading Transit and Light Company operated trolley lines throughout the city and surrounding area until January 7, 1952, when the last streetcar (# 807) made its last run to Mohnton.

Carsonia Park operated in Lower Alsace Township from 1896 to 1950. The park was constructed by the United Traction Company as a destination for its trolley service. Over the course of its existence Carsonia Park featured many rides and attractions. The roller coasters Jack Rabbit and Thunderbolt, The Airplane Ride, Dodgem Cars, Strato Ship, Castle of Mirth, The Pretzel, Shoot the Shoot, Cuddle Up, and a ferris wheel are just a few examples of what the park offered.

Neversink and Klapperthal and the Big Dam

The “Big Dam” on the Schuylkill River, below Reading, powered the Neversink Mountain Railroad. The Railroad commenced operating in June 30,1890, the third electric railroad in the United States, and the first electric railroad in America operated by water power. Edison electric generators were connected to the water turbines. The railroad was Standard Gauge, 56 lb. steel rails were used. Each car had two motors of 25 HP each, these were later increased as they were not sufficient to pull the grades. The Neversink Mountain Railroad ceased operations in 1917 due to financial difficulties.

Whander Field was an airport located in the field across Route 73 from the Schuylkill Valley High School. It was dedicated on October 29, 1927 and was still operating for recreational flying maybe up until the 1960s.

At the Kefauver Committee hearings in the U.S. Senate in 1951, it was revealed that organized crime was extending its tentacles into Reading, PA. Five years later, after a new Democratic administration took over in the city, the IRS launched a campaign to collect taxes from gambling machine operators. Two years after that the federal Alcohol and Tax Unit raided a huge still and IRS agents completed investigations of two large numbers banks. After President Kennedy signed into law interstate gambling legislation in 1961, J. Edgar Hoover sent 100 FBI agents into Reading to arrest more than 100 gamblers in a large craps casino. Year after year local law enforcement looked the other way as racketeers took over the city. A bookie working for the Philadelphia Mafia was murdered in Reading before testifying at a grand jury hearing. The local mob kingpin, Abe Minker, was eventually convicted and imprisoned, as was Mayor John Kubacki. The war raged for six years before organized crime lost its control of vice in Reading.

Monsignor Bornemann, or, as his people knew him best, Father Bornemann – was a true father to his people. Devoted to their welfare, spiritual and temporal, he had entered into the lives of successive generations as it is given to but few priests to do. He was a church and civic leader who contributed more to the welfare of all citizens of Reading and Berks County than any other person in local history. 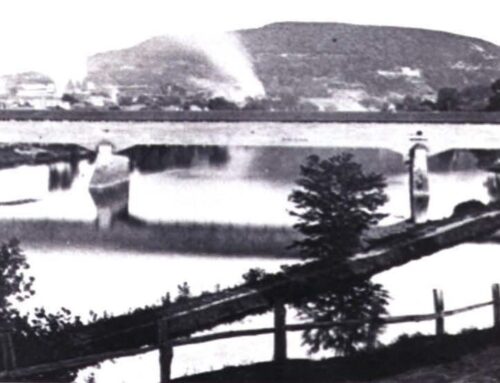