Of the legends that abound on behalf of Reading perhaps the most famous one of all is attached to the green years in which Tom Hannahoe served in the dual capacity of Irishtown’s Mayor and as the proprietor of the famous Stars and Stripes Hotel. For purposes of definition the nominal realm of Irishtown was that portion of Reading which is south of Penn Streets (and Perkiomen Avenue) and east of South Ninth Street. Today we call it East Reading.

The Stars and Stripes was something more than a hotel. Sure and begorrah, a man could wet his whistle with such potions as porter, stout, ale and spirit potions at this famous hostelry. But the hallowed premises provided much, much more than that. Fact is, depending on the day of the year, or even the time of the day you happened to drop in at the spa in the 500 block of South Eleventh Street, you just might rub elbows with the likes of John L. Sullivan himself. Or even with the Swedish Nightingale, Jenny Lind.

Alvah O. Schaeffer, a German man, moved into the neighborhood, a move that was not necessarily embraced by his Irish neighbors. But Hannahoe, a good-natured person, took a liking to Alvah and knew that if he befriended the “foreigner” his residency would be better tolerated.

It was the two men’s love for music that truly bonded their friendship. Hannahoe would dance, sing and play the piano and violin. Schaeffer was a professional cornet player. Together, the men spent many an evening entertaining the customers at the hotel and sealing their lifelong friendship.

On a Friday night in 1893 or 1894, depending on whom you ask, Alvah Schaeffer played one of Hannahoe’s favorite Irish tunes, “Lass O’ Galway.” Tom Hannahoe was moved to tears by his friend’s rendition of the song and so a pact was made.

The pact, simply stated, amounted to this: if the young Alvah Schaeffer died first, Tom would keep his memory green by fresh plantings of shamrocks each year on St. Patrick’s Day. If Tom Hannahoe would be the first to die, then Alvah Schaeffer would play an annual serenade to his (Hannahoe’s) memory by a cornet solo of “Irish airs.” These “Irish airs” later turned out to be such songs as Lass 0′ Galway, The Harp That Once Through Tara’s Halls and Nearer My God to Thee. (Irish?)

On February 10, 1897, Tom Hannahoe died of typhoid pneumonia. Five weeks later at midnight on St. Patrick’s Day, Schaeffer played the tunes over his dear friend’s grave. He continued the tradition through 1930 when arthritis in his hands prevented him from personally playing the songs, but Elmer Addis stepped in to continue the tradition. Alvah Schaeffer died on March 10, 1947 and was buried one week later on St. Patrick’s Day.

The tradition stopped for some 30 years but was restarted in 1977. Today, the musicians continue to remember the pact between Irishtown’s beloved Mayor and the German man who became his lifelong friend. 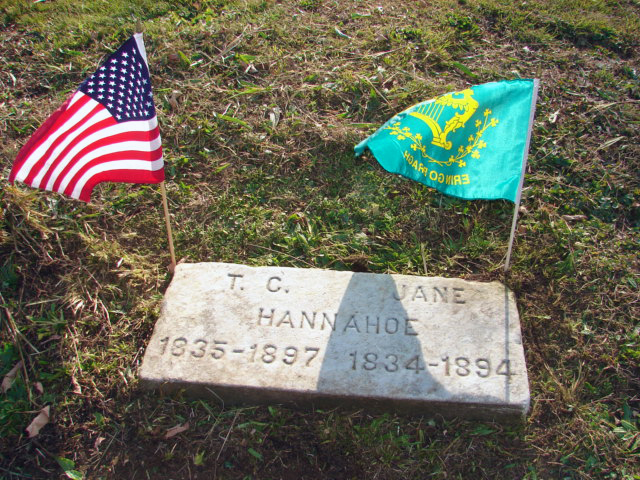