On May 25, 1996, a three alarm arson fire, out of control for more than four hours, destroyed the former Great Factory Store in the 1100 block of Moss Street. The building was vacant since July 1985.

The 2nd largest fire in the history of the City of Reading spread to dozens of homes, prompting the evacuation of 36 surrounding houses. The fire required city-wide recall of all firefighters, along with mutual aid from all over Berks County.

Witnesses said the blaze started in the first level of the old Great Factory Store outlet building in the 1100 block of Moss Street about 8:30 p.m. and quickly ripped through the four-story brick building’s wooden floors, sending flames 100 feet into the air.

Fire and dark, billowing smoke could be seen from as far away as Interstate 176 to the east and Bern Township to the north.

In its heyday, the area was home to the Great Factory Store and some of the city’s premiere knitting and apparel mills, including the Chancellor Hosiery Wills, David Crystal Inc. dresses, Gail Knitting Mills. Rachman Manufacturing Inc., M&M Knitting Mills Inc., Berks Sportswear, I. Sherry Co., E. Schulze and Sons hosiery dyers and the sprawling DS&W Hosiery Co., which was housed in buildings on both sides of Moss Street. 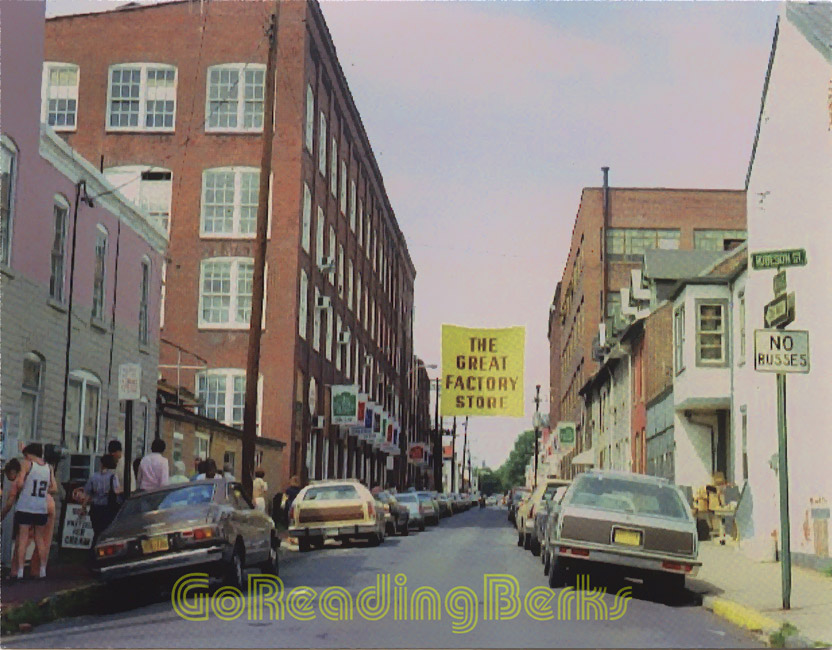 The last operator of the Great Factory Store, BRI Corp., was involved in legal battles with the property owners for back rent and other claims. BRI s chairman at the time was Leon W, Gerst. Shirley Rachman of Mount Penn and Pearl Rachman of Reading filed suit against BRI. The Rachmans were heirs to the estates of Tobias Rachman and Frank Rachman of Rachman Manufacturing.

A 15-year-old from Oley Street admitted flicking a lighted cigarette and matches in the former Moss Street outlet building.

Fifteen-year-old Gerald A. Bender Jr. of the 900 block of Oley Street told police he tossed a lighted cigarette into a pile of trash and also flicked lighted matches onto the wooden floors of the former Great Factory Store.

Bender told police he had sought refuge inside the vacant building about 4 p.m. that day after an argument with his father.

After he flicked the lighted matches onto the floors, he threw a lighted cigarette over a partition, according to the boy’s statement to police.

Moments later, Bender told police, he saw an orange glow coming from behind the partitions, When he looked, he saw flames too high to put out by himself and he fled.

After a Berks County Court hearing before Juvenile Court Master John D. Levan on Monday, Bender was ordered committed to the Berks County Youth Center, Bern Township, while awaiting a hearing on the charges against him.

On July 8, 1996, the teen was found guilty of charges from the blaze although he denied his earlier confession to setting the Great Factory Store fire.

The Reading teen-ager claimed he gave a bogus confession implicating himself in the May 25 fire at the former Great Factory Store outlet, was convicted Monday of all charges.

Gerald A. Bender Jr., 15, of the 900 block of Oley Street, sat motionless, staring straight ahead, as Berks County Senior Judge W. Richard Eshelman issued his decision at the conclusion of a three-day trial in juvenile court.