The Heritage of Reading: 1745 -1813: Original topography and the Town Plan

The Heritage of Reading: 1745 -1813: Original topography and the Town Plan

When Thomas Penn and his engineers were discussing the location and plan for the county seat of the proposed Berks County (1745-1748), the land east of the Schuylkill, west of Mount Penn and north of Mount Neversink was divided into large estates whose boundaries were situated at 70 degree angles to the meridian; diagonal to our present east/west streets. The most ideal location was east of the ford in the Schuylkill River where the Penn Street Bridge now stands. The land which Thomas and his brother Richard, the Proprietors of Pennsylvania, acquired for their town was situated by this ford and bounded by old estate lines: south of what was to be known as First Hockley Lane (West Elm and Woodward Streets remain today) and north of what is now Bingaman Street (see annexations map).

Below: First Layout of Reading. 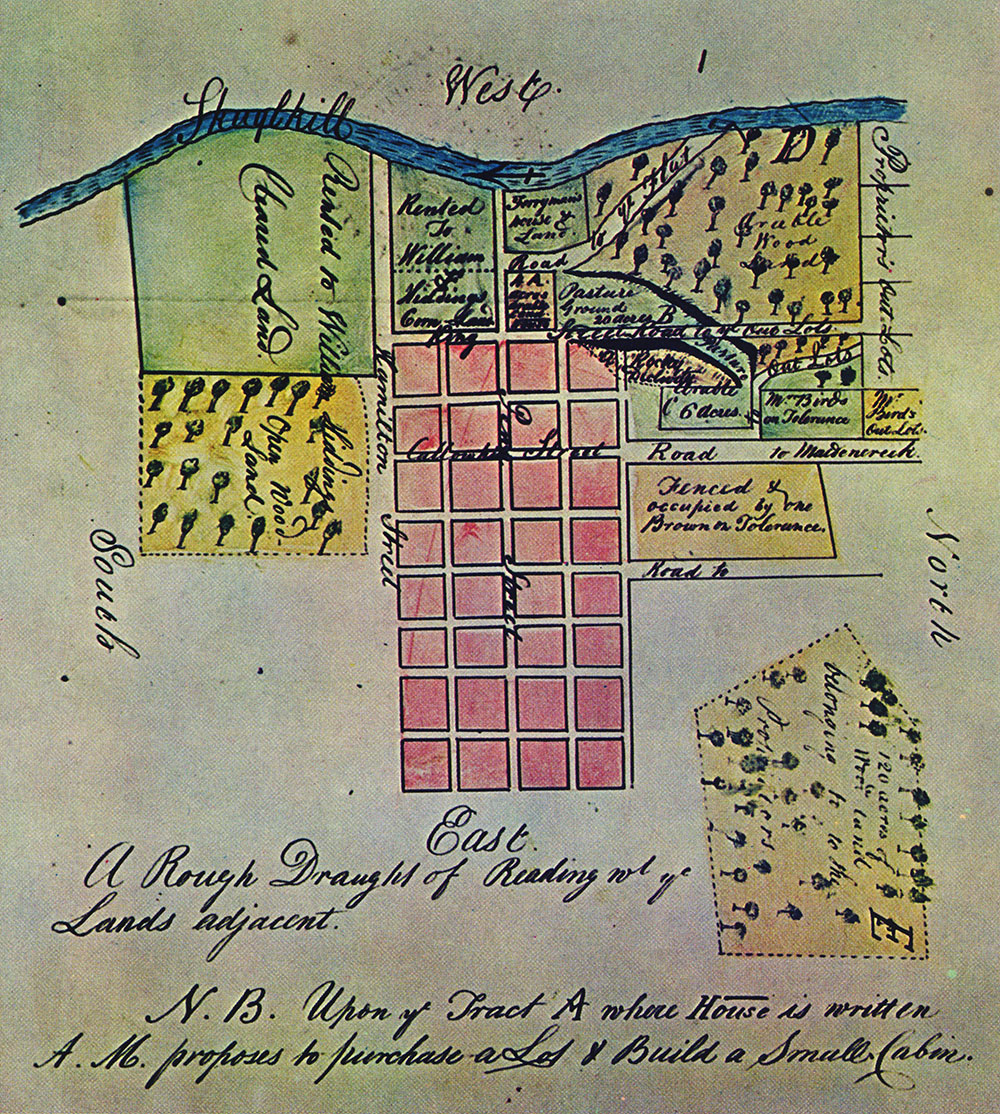 This strange angular division of estates, rather than a compass point division, had probably been devised along the direction of the ‘Great Hollow,’ a deep ravine which ran from what is now Front and Washington, northeast, to what is now Fifth and Buttonwood. This was the only natural land division near the ford in the Schuylkill. The ford, being the most convenient crossing place along the Schuylkill, was the convergence point for the few roads which crossed the area. The major thoroughfare was the Tulpehocken Road, which ran from Philadelphia to Harrisburg by way of Reading, along the route of what is today Perkiomen Avenue, Penn Street and Penn Avenue. Other early roads eventually became Centre Avenue, Hampden Boulevard, and North Eighth Street and Kutztown Road. These roads were carved out of older Indian trails which naturally ran along the easiest geographical routes, through valleys and dry areas and around hollows and swampy ground.

The convenience of both the ford and these roads made this area most desirable for the location of Reading. Finally, in 1748, Thomas Penn decided to plan the town according to the compass points and not according to the 70 degree estate boundaries. The advantage of the chosen system was that the main street could pass roughly through the center of the town and still terminate at the ford, and at the same time it could follow the path of the Tulpehocken Road. The disadvantage was that a compass-point plan would run into trouble if the town ever developed beyond the original boundaries, because it would conflict with the 70 degree angle property lines of the outlying estates. This indeed happened, and is the reason why Reading today has streets which do not adhere to the compass directions: Centre Avenue, Bingaman Street, South Street, Lombard Street, Hiester’s Lane. Evans Avenue, Woodward Street, Green Terrace, and every street west of Schuylkill Avenue.

A formal plan of streets and lots was made in 1748 for all the land within the original boundaries. The main street was Penn, which incorporated part of the old Tulpehocken Road. The principle north/south street was named Callowhill Street after the wife of William Penn (now Fifth Street). Both these streets were 80 feet wide. Penn Street widened to 160 feet for a block on either side of the intersection of Penn and Callowhill and these two blocks were named Market Square, because the farmers’ markets were to be housed here. An even larger square, 200 feet by 270 feet, was carved out of the intersection, with the intention of having a court house eventually built in the center. The other streets consisted of Walnut, Washington, Franklin, Chestnut, Front, and the number streets from Second through Eleventh (all these under different names), and were 60 feet wide. The alleys were to be 20 feet wide: these consisted of what are now Court and Cherry Streets, and all the remaining north/south streets. The lots between Walnut and Chestnut Streets were 60 feet by 230 feet, and all had their frontages on the north/south streets except for the lots fronting on Penn Street. There were no east/west streets planned north of Walnut or south of Chestnut, and the lots in these areas were three times larger than the others, and were not designed for immediate town development. On these lots, lessees were required to erect a building within five years before they could receive title. Those assigned the lots nearer to Penn Street were required to erect buildings within three years, and those on Penn Street itself required buildings within two years. By this plan the Proprietors hoped to give the area the appearance of a substantial, prosperous town, oriented around its main street and centered on its market place, and eventually, its court house, in as short a time as possible.

The plan worked, and the lots sold very quickly. In 1748 there was one house within the town boundaries; by 1751 there were about 100 houses; within the following year that figure had doubled. Between 1756 and 1760 Reading came very close to being permanently evacuated due to the proximity of Indian raids during the war with France, but the aggression was turned back and after 1760 development commenced confidently. By 1764 all but 17 lots were sold. The markets were established in 1766. By the end of the 18th Century many of the original log houses had been torn down to be replaced with longer – lasting stone and brick buildings, especially along Penn Street. Activity was centered on Market Square, and was limited to daylight hours, as there was no street lighting. Most transportation beyond the town was done on the river, although the roads were beginning to become more popular as a means of travel. People tended not to live right along the river unless their vocations required it, as the river flooded very easily, and it was believed that the riverbanks spread disease.