St. Catharine’s Orphan Asylum for Girls was founded due to the generosity of Mrs. Catharine Madary, a Reading widow who passed away on May 22, 1871.

Below: The photo below shows the small beginning of St. Catharine’s Female Orphan’s Asylum. 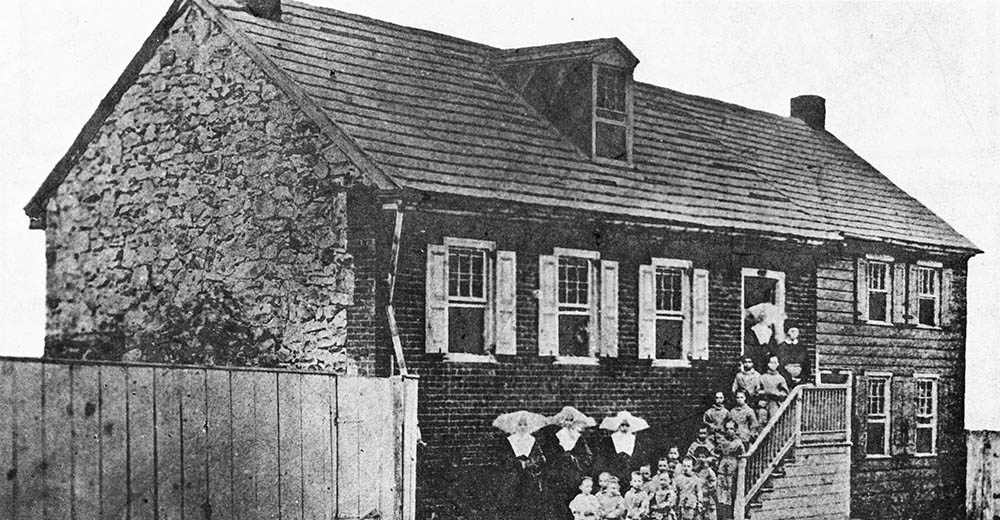 Due to her love of children, Mrs. Madary left her entire estate for the establishment of a home to assist children who had no home. The estate consisted mainly of two properties on Franklin Street in Reading between Tenth and Eleventh Streets, and was given to Archbishop Wood of the Archdiocese of Philadelphia for the purpose of establishing an orphanage. The Archdiocese of Philadelphia helped to oversee a number of orphanages and Reading was still part of the Archdiocese of Philadelphia at the time. A call went out for women religious to staff the facility. With the supervision of three Sisters of Charity from Emmittsburg, Maryland, the orphanage opened on April 15, 1872. The orphanage was located at 1026 Franklin Street in Reading and at first consisted of a one-story brick building. Over the next two years, a three-story addition that measured 50 feet by 40 feet was added to the existing building. Given the need, another three-story brick building was erected in 1886-87 at the existing location. The orphanage received a favorable report in 1885 when visited by representatives of the Board of Public Charities of the State of Pennsylvania. The report read:

“A very comfortable home for friendless children is provided for the purpose. It is kept in admirable order. The school rooms, dormitories, bathrooms, the infirmary, etc., were found in excellent order and condition. The benefit of large exercise grounds attached to the home is enjoyed. Girls are only received from two to ten years of age, and kept until thirteen or fourteen years of age. They are taught useful branches of education, sewing, and household duties. There were 34 pupils on the day of our visit; no sick. The sanitary condition is excellent.” (Report of the Board of Commissioners, 1885, p. 54)

By 1909, the number of girls served in the institution had risen to 90, and the number of sisters serving the girls had risen to nine. Father Bornemann, rector of St. Paul’s R.C. Church, Reading, PA, assisted St. Catharine’s Orphanage with various dry goods after his plans to establish a sanatorium for the treatment of tuberculosis victims were dashed when the Neversink Mountain Hotel, that overlooked the City of Reading, burned down the day before the renovations were completed. There was a large supply of bedding and table linens that were not at the hotel, but were in the process of being laundered at a cleaner in Reading. St. Catharine Orphan Asylum for Girls was one of the four institutions that benefited from the donation of these items due to the fire.

As many other Catholic orphanages closed with the proliferation of government sponsored homes and assist programs, St. Catharine’s remained open throughout the first half of the twentieth century until its closure in the mid-1960s. After the orphanage closed, the Allentown Diocesan Office of Education was housed in the first two floors of the facility beginning in 1965. This was due to the fact that the first superintendent of schools for the Diocese of Allentown, Reverend Monsignor Henry J. Huesman, was Pastor of St. Paul’s Parish in Reading. Monsignor Huesman was appointed superintendent in 1961 and remained in the position until 1970, when he resigned his post. Bishop Joseph M. McShea, First Bishop of the Diocese of Allentown, appointed the Reverend Francis X. Barrett to succeed Monsignor Huesman as superintendent in May 1970. With Monsignor Huesman no longer Superintendent of Schools, and the desire to locate diocesan offices to the Allentown area, the Diocesan Office of Education was re-located to Allentown in 1971, and Father Barrett’s residence was changed to Sacred Heart Parish in Allentown. The old orphanage, now vacant and aging, was razed in the early 1970s. The B’nai B’rith House currently occupies the site.