Below: Conrad Weiser’s business, lot No. 3, above Fifth Street. 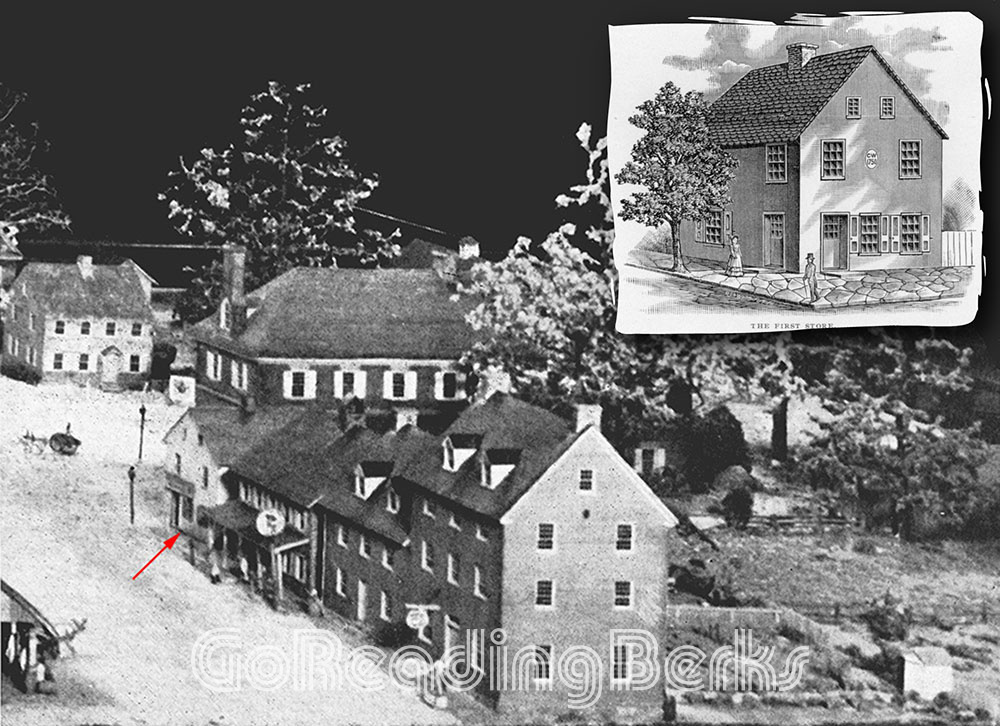 Nevertheless, Conrad Weiser patented the corner of Sixth and Penn and held it for eight years before selling it to Kraft Hiener from Stuttgart, a baker who was such a picturesque figure in the early municipal history of Reading. This was the Corporal Hiener who boastfully offered, if given arms and ammunition, to form a local company, march up to Quebec, and capture the Marquis de Montcalm.

Hiener, in addition to the corner, owned the tract on Neversink Mountain, land long known as Hiener’s Whistle. This took its name from the German word wiese meaning a meadow and upon it was the never-failing spring of fresh and clear water. Kraft and his wife must have been exceptionally strong and vigorous for legend has it that they erected a stone dwelling on their Sixth Street corner with boulders which they brought from Hiener’s Whistle in baskets perched on their shoulders. Kraft Heiner died in 1805 and his heirs sold the corner to John Francis Eichorn, an emigrant from the Rhineland, for a price of fourteen hundred silver pounds, Pennsylvania currency.

When Eichorn first negotiated with the Hieners for the purchase of the corner, he was in business with John George Repplier, vending dry goods on the north side of Penn Square where the first Academy of Music afterwards stood. He altered the Hiener building, adding an extra story with dormered windows and used the first floor for his business. Apparently he soon found, as his descendants later realized, that it was more profitable to lease the storeroom than to use it himself.

On a certain autumn afternoon of 1830, John Francis Eichorn died in the second-story bedroom. His  daughter, Mary Cecilia Eichorn, married Charles L. Heizmann who was a musician of a sort and dealt in pianos in the same shop where his father-in-law had sold dry goods. All of their children were born in the old family home, on the southeast corner of Sixth and Penn Streets. Charles Raymond Heizmann, eldest child of Charles L. Heizmann, founded the Penn Hardware Company in Reading, PA in 1877.

For many years the property was administered for the benefit of all the Eichorn children, but by 1847, after protracted proceedings in the Orphans Court, Charles L. Heizmann became the sole owner and remained so until his death in 1859.

After the death of Charles L. Heizmann a succession of commercial tenants occupied Eichorn’s former storeroom. Meanwhile, the neighboring firm of Dives, Pomeroy and Stewart, whose rapid and successful growth was the envy of their competitors, were coveting the corner and negotiating for its acquisition.

Below: Heizman Building, Southeast corner of Sixth and Penn, 1845. 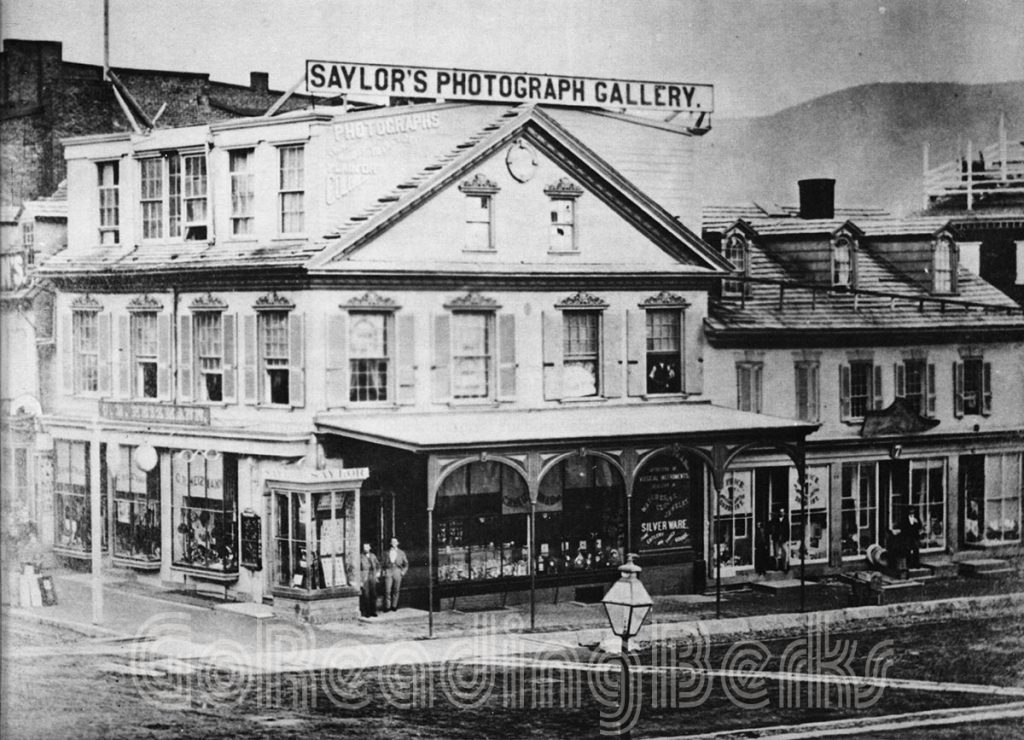 Below: Southeast corner of Sixth and Penn in the 1890s. 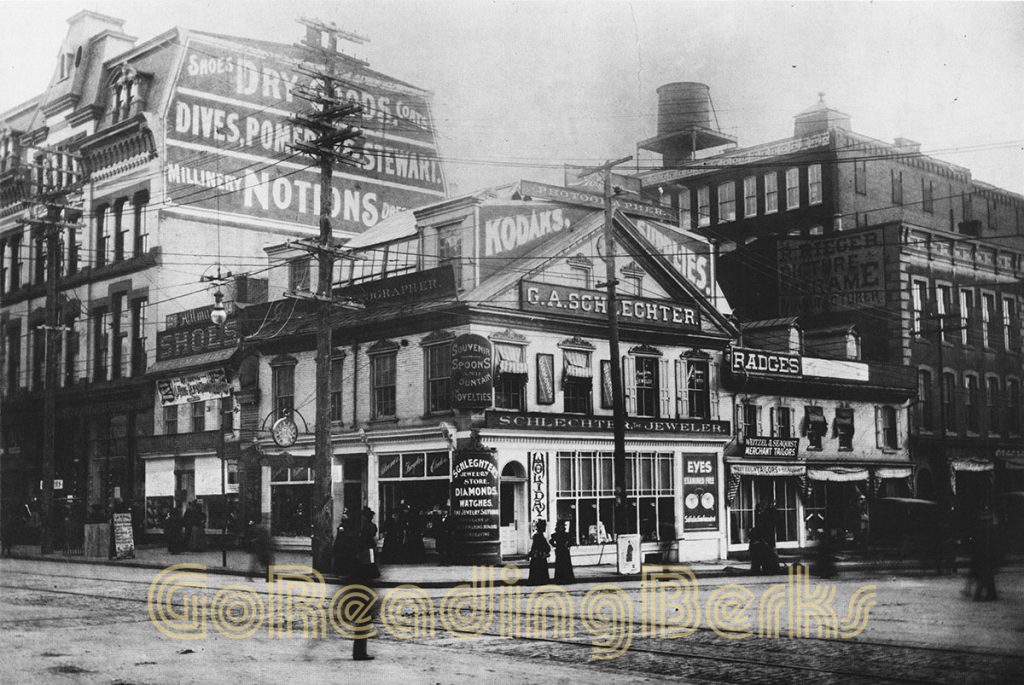 Initially, the Heizmann family heirs were reluctant to lease the land to Dives, Pomeroy & Stewart, the forerunner of Pomeroy’s Department Store. After much deliberation, members of the Heizmann family agreed to lease the property to the department store beginning in November 1899 for a ninety-nine-year term. The agreement called for a seven-story addition that would be regarded as the first skyscraper in the city and a source of great wonder to the people for many miles around. The department store agreed to have the words “Heizmann Building” engraved at the building’s top as a tribute to the corner’s former occupant. The lease called for an annual rent of $7,200 over the course of the next ninety-nine years. 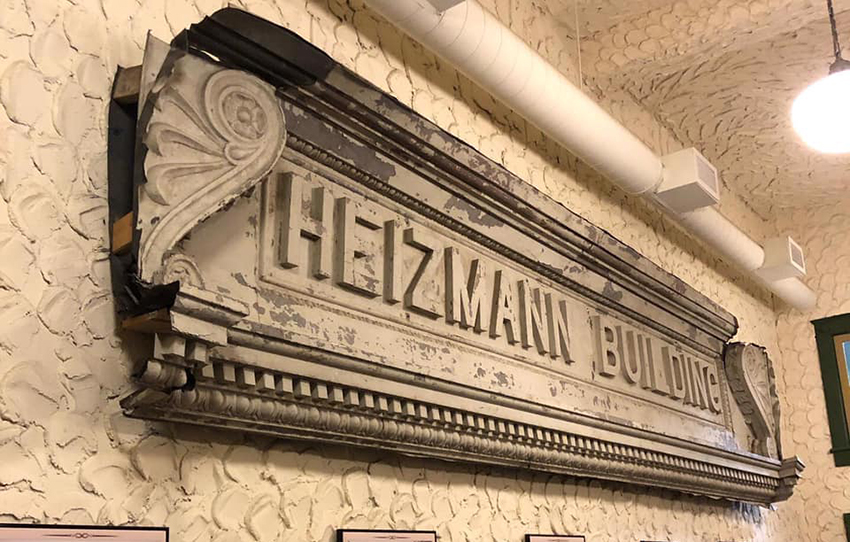