In July of 1870, workers began to erect a building at 135 North Sixth Street which was to contain a market house and Masonic Temple. However,  the panic of 1873 – 74 prevented completion so the property was sold by the sheriff to George D. Stitzel, William Nolan, and William Shomo. Using plans made by Philip Bissinger, the new owners erected a two-story brick building on the site. They then leased the second floor to the Harmonie Maennerchor which held balls, bazaars, masquerades, and concerts; thus, the property became known as Maennerchor Hall. When the Maennerchor moved to new quarters on North Sixth Street, the building was leased by the Reading Verein.

James Nolan and John Mishler purchased an interest in the structure in 1896, organizing the Academy Company. It was then that the necessary changes were made and the former market house became the Academy of Music, with the Reading Turn Verein continuing to occupy the top floors. The renovated structure was 80 feet in width and 230 feet in depth, with a grand entrance 14 feet wide by 100 feet deep. On the south side was the Academy Café and on the north side was the office of the Union Transfer. The Academy, which was the first theatre in Reading built on the ground floor, was divided into three sections: the gallery with 306 seats; the balcony with 473; and the parlor chairs, orchestra, and orchestra circle section with seating for 892 patrons. Various size medallions dominated the ceiling and dome from which was suspended a massive prism chandelier. The beautiful frescoes, displaying foliage of flowers and sprays and rare tropical birds in rich plumage, were based on original designs by Philadelphia’s Louis MacLaurin. In its years as the Academy of Music, the 1,671 seat theatre presented approximately 4,044 dramatic and musical shows featuring appearances by stars like Lillian Russel, Tyrone Power, Eddie Foy, Ethel and Lionel Barrymore, and Douglass Fairbanks. 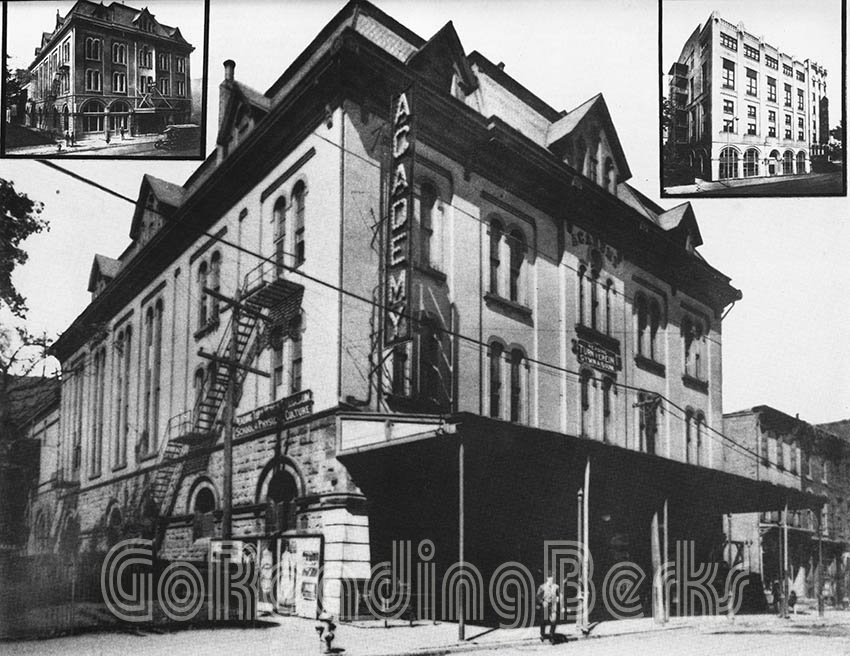 In 1917, the building changed hands again when it was purchased by the Rajah Temple and renamed the Rajah Theatre. Under the direction of the trustees of the Shrine, George F. Eisenbrown, Potentate, and J. Edward Wanner and J. Wilmer Fisher, Directors, Phil Levy was installed as resident manager with William Cook as stage manager. The theatre opened in the fall of 1917 with a spectacular street parade featuring camels, Arabs, and a long list of Shriners. The opening attraction on stage was “The Garden of Allah,” featuring Sarah Truex and Howard Gould. Various luminaries appeared on the stage of the Rajah during the next four years.These included Al Jolson, Otis Skinner, the Dolly Sisters, and Alfred Lunt. 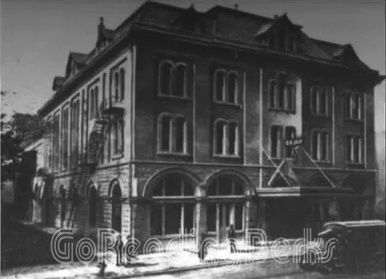 Tragically, fire struck the Rajah on May 10, 1921, destroying the front of the building and causing damage of more than $100,000. The entire interior was ruined by fire and smoke. Undaunted, the Rajah Temple members rebuilt the building immediately. 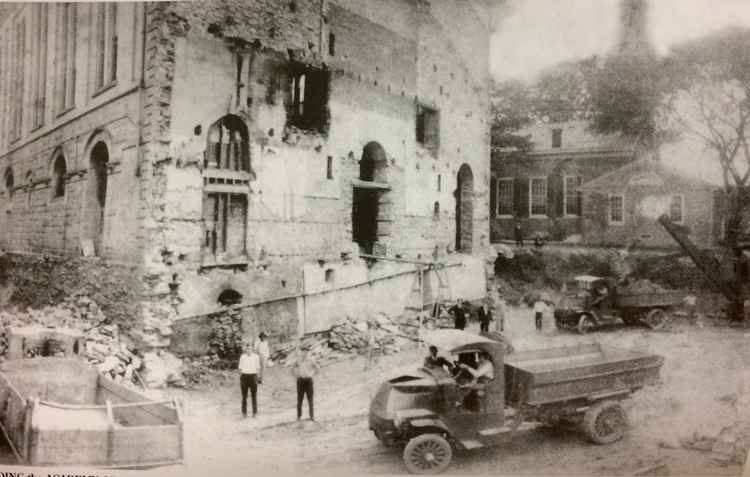 After the new building was completed, the theatre was leased to Wilmer and Vincent who went on to operate it for ten years, during which time they presented a mixture of vaudeville, stage Griffith’s “Way Down East.” Appearing on stage during the Wilmer and Vincent reign were Fay Bainter, Ethel Barrymore, Basil Rathbone, Fanny Brice, and other stars of the day. Also, in 1923, the Orpheum stock company was transferred to the Rajah and, under the direction of William Naughton and Rose Ludwig, became the Rajah Players. Managers during these years included George W. Carr, Frank D.

Hill, and Frank O’Brien. Frank Harms and George Gross were among the orchestra leaders. The Wilmer and Vincent organization attempted a variety of innovative programs, including “the Supper Show” which was held every Saturday evening at 6’oclock “for those who want to avoid the afternoon and evening crowds,” as stated in an ad which ran in the October 11, 1925, edition of the Reading Eagle. Another feature was the regular children’s matinee from 1:30 to 3:30 PM with a special admission rate. 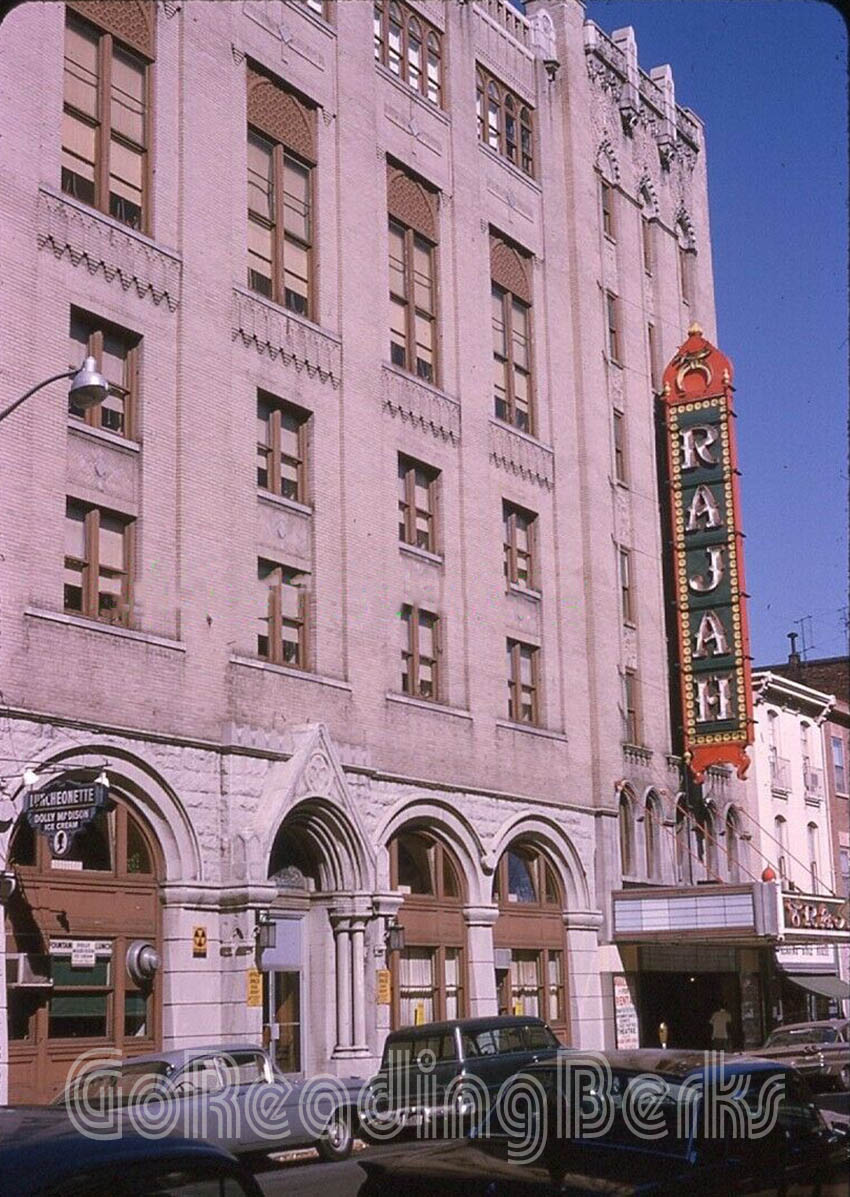 Wilmer and Vincent relinquished operation of the Rajah in May of 1931, with the Board of Governors of the Shrine in charge again during the 1932 – 1933 season and William Heckman as manager. Irwin Yates managed for a brief time in 1933 before Finch and Ahl took over for a three year run of motion picture double feature programs. The year 1937 saw the Rajah Theatre Company in charge, with Jay Emanuel and C. G. Keeney as executives. Calvin Lieberman was the house manager. During this period, stage attractions, concerts, and motion pictures were featured. Also part of the program were free dish nights for all ladies who purchased a 250 ticket. In 1946, the lease passed to Keeney who continued the same bill of fare. The theatre orchestra at this time was conducted by “Saxy” Shollenberger and Joseph Borrelli. Among the entertainers brought in by Keeney were Ethel Waters, Eddie Cantor, George Jessel, Mae West, and Boris Karloff. Many patrons will also remember the Big Bands who came to town. These included the orchestras of Ray Eberle, Lionel Hampton, Sammy Kaye, and the Nat King Cole Trio. Even Gene Autry appeared on the stage of the Rajah. In 1954, Keeney’s ad in the January 31 edition of the Reading Eagle heralded the visit by the cowboy star as the “Hit Show of 1954,” and, indeed, it was. Autry appeared on Thursday, February 18, and in an article written for that Friday’s Reading Times, staff writer, Dick Peters, told how capacity crowds had turned out to hail the film, radio, and television star. In the article, entitled “Cowboy Here to Stay, Autry Tells Small Fry,” Peters stated that a sellout crowd for both performances indicated that “the movie cowboy still is first in the hearts of his young countrymen” with no danger of “the space cadet or rocket ranger” ever replacing him.

The Rajah theatre ceased operation as a motion picture house sometime in the fifties, but it has continued to serve as Reading’s center for topnotch stage shows featuring celebrities like Ella Fitzgerald, Betty and Rosemary Clooney, the Three Stooges, Eddie Arnold, and, more recently, Emmy Lou Harris and Shari Lewis (with Lambchops). The North Sixth Street theatre also continues as the home of the Reading Symphony Orchestra, the Star Series, and Haage/Harris Presents programs. Also using its facilities over the years were Reading Civic Opera Company and the Junior League of Reading for its Town Hall Lecture series. In fact, the Rajah Theatre has performed yeoman service as an entertainment center for Reading and is the last of the city’s old theatres still in operation. It remains the only old theatre in the city where one can still sit in a velvet seat, gaze dizzily at the domed, frescoed ceiling and the “old world” opulence of the theatre boxes, and reminisce about the old days when Benny Goodman swayed onstage and Gene Autry’s horse, Champion, galloped onto the wooden boards. It’s still possible to recline in a seat in the gravity-defying balcony and remember sitting there with hordes of other kids during Holy Week watching the free showing of “King of Kings,” starring Warner Baxter as a silent Jesus. The Rajah was restored to its former glory, enabling it to survive as the last example of Reading’s golden age of movie palaces. Today, known as the Santander Performing Arts Center, it is home to the Reading Symphony Orchestra and the Broadway on 6th Street series. 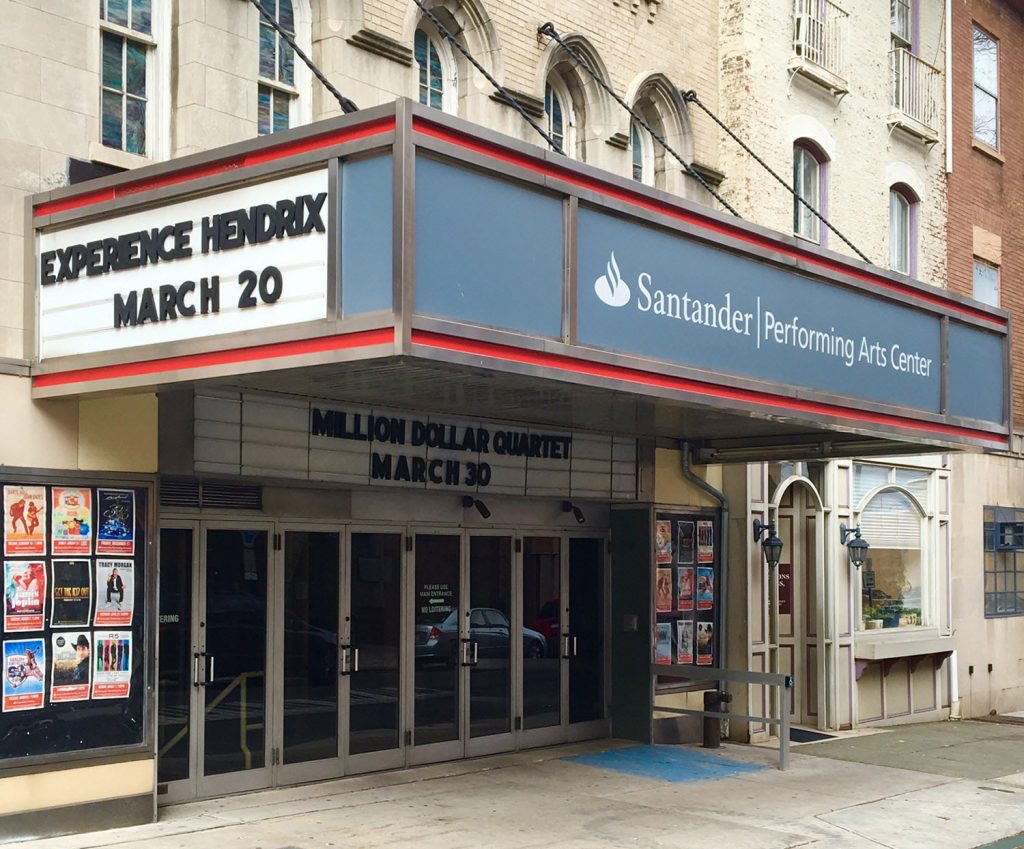