Few shoppers at the former Madeira Shopping Plaza, the commercial strip that extends from the former K-mart to the Redner’s Warehouse Market, opposite today’s Fairgrounds Mall, would guess that the land once was home to a farm and airfield.

The Madeira family had owned the farm property for well over a century. One of the last farms in Hyde Park, the Madeira farm extended from Kutztown Road to what is now Fifth Street Highway. The home for the farm fronted at 3000 Kutztown Road. Most of the farm was modified for airfield use in 1919 by Charles H. Madeira. The site of Madeira Field was located northeast of the current intersection of Route 222 & George Street. Over time, the landing site grew in popularity, with pilots building hangars and improving the two grass runways. It became known as Madeira Field. With the arrival in Reading of Eddie Nibur, an excellent aviator of considerable experience, Madeira Field ceased being just a barnstormer’s haven and became a commercial port for chartered flights and student instruction. Below: 1925 aerial view showing a biplane on Madeira Field. After World War II, more pilots began renting space at the larger Reading Regional Airport, causing a slow decline at Madeira Field. It continued in a small capacity until 1963.

Below: A 1935 photo of an Aeronca “Flying Bathtub” at Madeira Field with members of the Goodwill Air Service & Flying School.

Below: The Goodyear Blimp Mayflower at Madeira Field, year 1930. 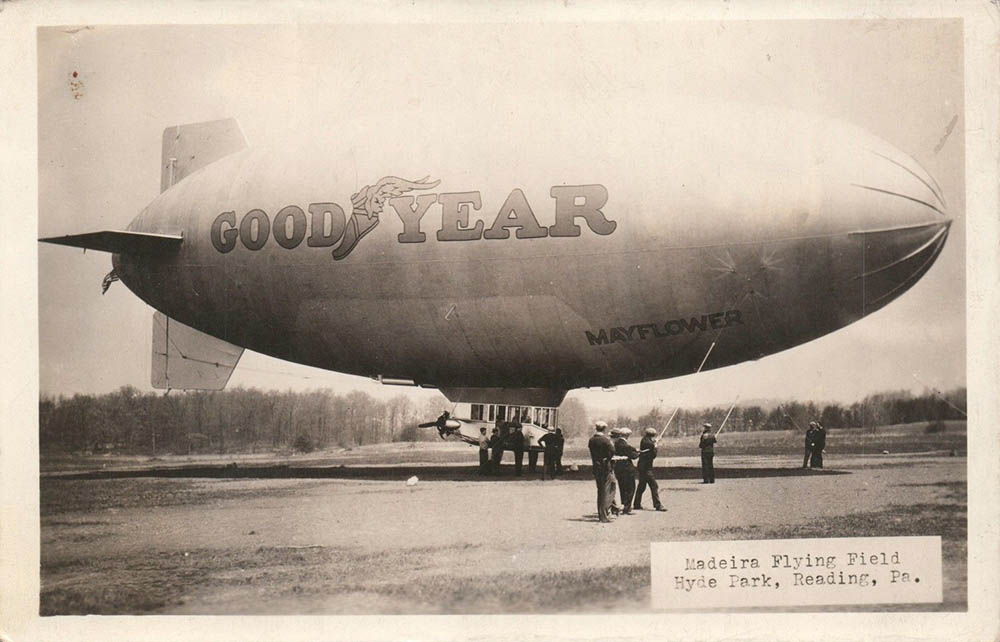 In 1967, Madeira Field was sold, and the land became a strip mall. When it closed, it was the oldest airport in Berks County.

Below: The changing faces of business: once Pantry Pride, then Acme, then an office supply store on the site of the former Madeira farm and airfield on the east side of the Fifth Street Highway, former Madeira Plaza. Below: Looking north, the Fifth Street Highway looked quite a bit different in the 1970s than it does today. On January 27, 1969, a wrecking crew began the demolition and removal of the Madeira farm house and out buildings, the last structures remaining on what was, from 1919 to 1963, the eastern extremity of Madeira Field. Much like the former Reading Fairgrounds, a center of auto racing across the Fifth Street Highway, Madeira Field is nothing but a memory.