On the west side of the Schuylkill River above the Bingaman Street Bridge sits an island with a narrow channel separating it from the shore that has been lost to the test of time.

The little island near the foot of Bingaman St., was once the scene of festive gatherings on celebration and battalion days, and many occasions of enjoyment took place on its green banks in the days of “Auld Lang Syne.” It derives its name of Independence from the patriotic assemblages which met there to celebrate the nation’s birthday, and not only on this day, but throughout the pleasant seasons the youth of Reading wandered to its banks for purposes of recreation and enjoyment.

Below: Location of Independence Island near the foot of Bingaman St. 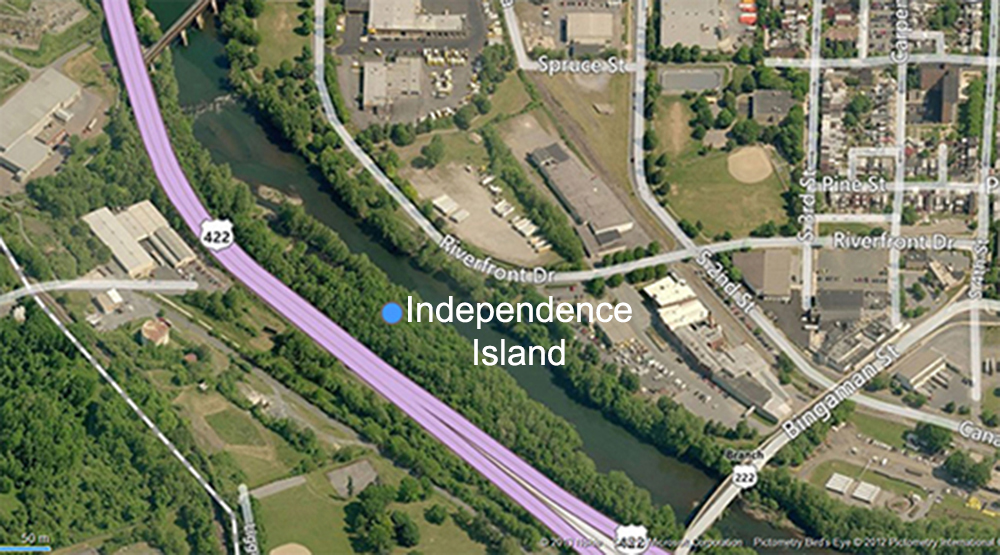 The island was once one of the Reading’s favorite resorts. There was a pontoon bridge from the east side of the river across the Schuylkill to the island. Along the shore were located numerous little boat houses, where small craft were maintained for those who enjoyed a ride down the river. On the island there was a swing and a large dancing platform. A small hotel was located nearby where all kinds of drinks from whiskey to beer, lemonade, mineral water and sarsaparilla were served. The island’s banks were lined with weeping willow trees whose branches almost kissed the waters of the Schuylkill. Many a royal banquet took place under its huge shade trees.

The 4th of July was never allowed to pass over by the political parties of that day without a spread to which the leaders came, and after filling themselves with food they would respond to appropriate sentiments of the day, and again renew their pledges of love and veneration for the eternal principles of freedom and constitutional liberty. The Democrats always held 4th of July parties at Mineral Springs Park in East Reading, while Independence Island claimed the Whigs. Men of state and national reputation aired their opinions under its venerable trees. On its green lawn the faithful gathered to hear the story of Washington and the revolutionary fathers, and how the patriots fought their country’s battles from Bunker Hill and Lexington to Monmouth and Valley Forge and Yorktown and from Lundy’s lane to New Orleans.

The tremendous flood of 1850 swept everything from the island. The pleasant means of enjoyment were never replaced, and the place as a resort of the people fell into disuse. The island is still there but hidden behind trees which nature supplies with each returning spring.