Although a few houses were built along Kutztown Road before 1838, it wasn’t until that date when a  blacksmith by the name of Jacob Lutz secured a parcel of land and thereupon erected two stone buildings at the comer of what would become Kutztown Road and Madison Avenue. His improvements to the site were probably the first to be made at what is now known as Hyde Park.

The two structures Lutz built can still be seen on the northeast corner of Kutztown Road and Madison Avenue, opposite Freymoyer’s Hotel. Lutz continued his trade into old age.

Below: The former Jacob Lutz blacksmith shop, presently a residence at 2701 Kutztown Road, was the first business place in what is now Hyde Park. Lutz settled here in 1838. The people on the right would today be standing in the middle of Madison Avenue. In the insets, are Jacob Lutz, left, (1805-1890), and Peter Leas (1844-1917), Lutz’s son-in-law and also a blacksmith here for many years. It’s interesting to note that the corner house at 2701, part of which was the original blacksmith shop, wasn’t on the corner until Madison Avenue was ex-tended across Kutztown Road, in an easterly direction, around the turn of the 20th century. 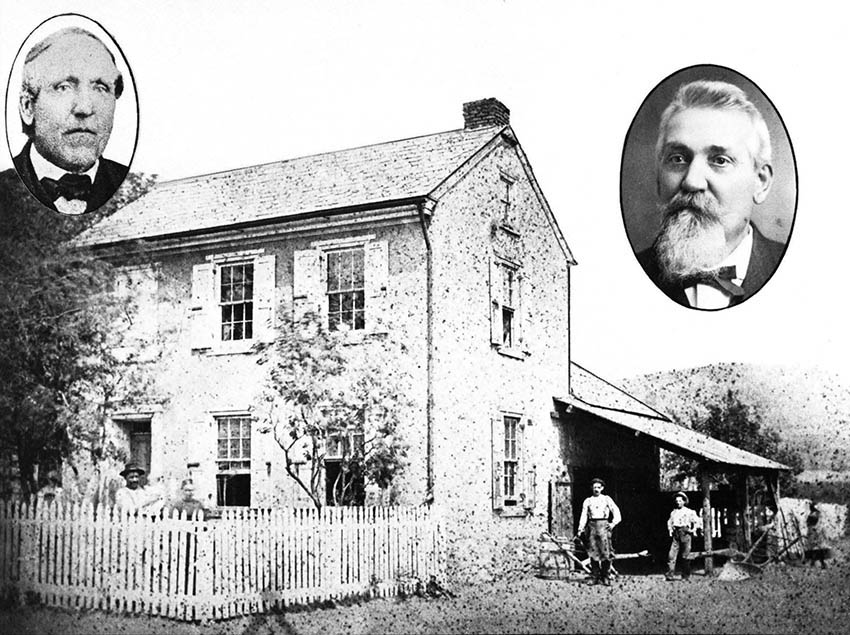 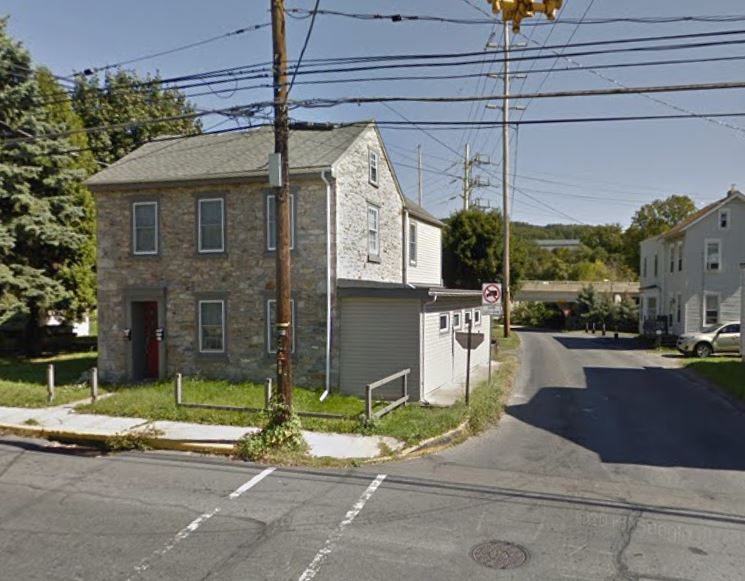 Soon after, John Frymire and William Umbenhauer bought sixteen acres of land straddling Kutztown Road north of the blacksmith shop and parceled it off as building lots. A community quickly grew. In 1876 Frymire opened a hotel across the road from Lutz’s blacksmith shop on the northwest corner. The large, 20-room hotel (renamed Freymoyer’s) still stands on the site. Hyde Park traces its beginnings to the completion and opening of this public house, built to cater to those who soon would move into the area, as well as the established residents.

Below: Freymoyer’s Hotel, Kutztown Road and Madison Avenue, as it appeared in 1986. 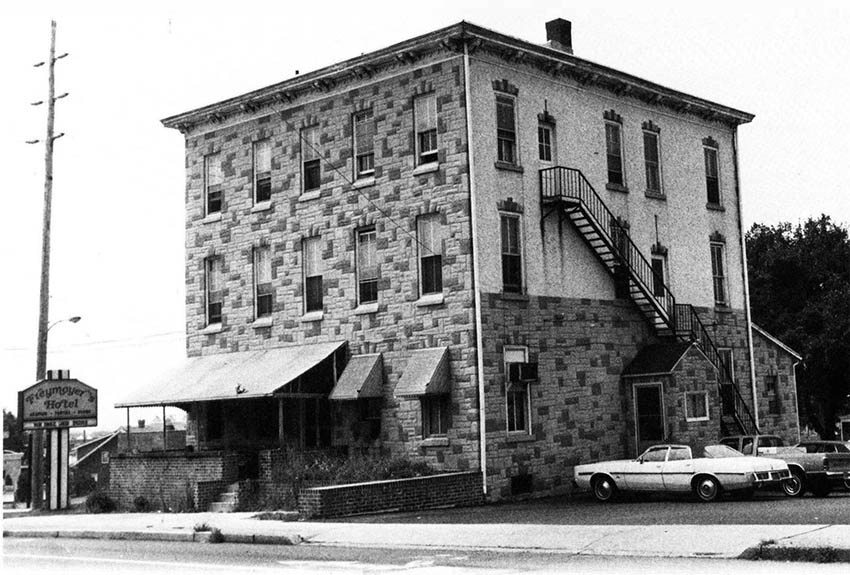 John Frymire was a veteran of the Mexican War (1840s) and was widely known as a cabinetmaker and stair builder. In earlier years, he was a teamster who used six white horses.

He was a powerfully built man. John and his wife, the former Hannah Coller Adams, had four children; one died quite young. According to existing records, Fry-mire retired in 1885 and died 10 years later at the age of 59. His wife survived him by only a few years.

Not long after Frymire built his hotel, Henry Miller built a grocery store a half-mile north of the hotel and it remained a viable business through three generations of the Miller family.

Below: The B. L. Miller Grocery Store, 2942 Kutztown Road, erected by Henry Miller shortly after 1876. The building at present bears little resemblance to what is pictured below, which is how it looked in 1974. 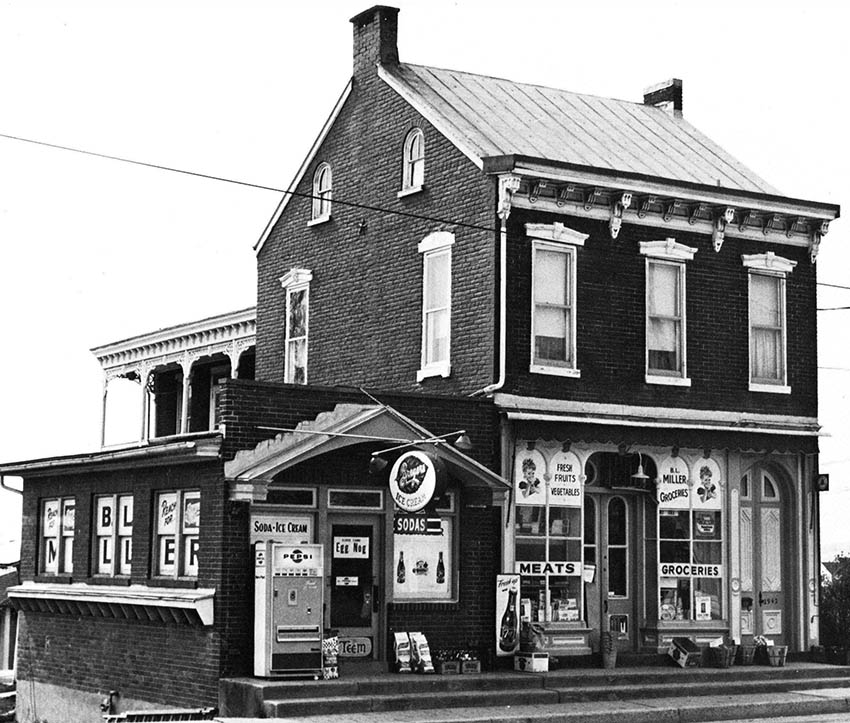 To the east along Spring Creek in Spring Valley was located the hamlet of Bemharts. The Bernharts were early settlers. John Bernhart built a house and gristmill in the valley and also a hotel. The 1854 map of Berks County shows “Bernharts mill and tavern” along Spring Creek, so the structures were built earlier than 1854. Bernharts post office originated in the tavern. The East Penn Railroad ran through the hamlet, its station called Bernharts Crossing. 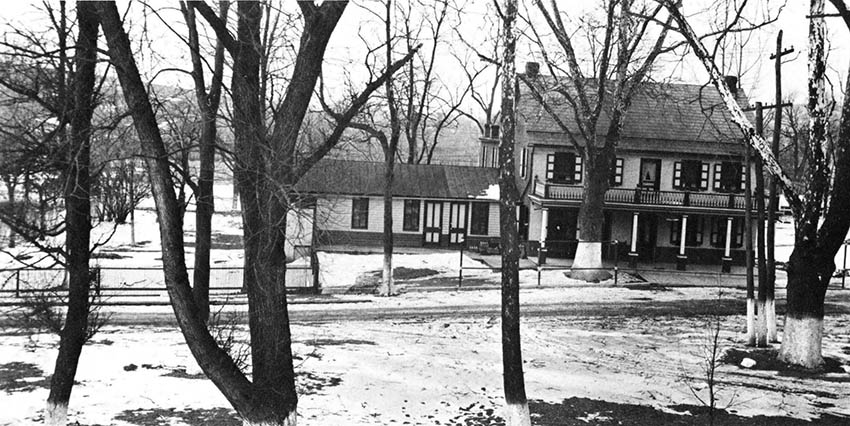 With the trolley came new residents all along the line from Reading to Temple. But lacking the natural resources that made Temple a thriving industrial area, Hyde Park grew as a residential community whose inhabitants for the most part worked elsewhere. As the population of Hyde Park grew, the residential area expanded to the west to form a neighborhood which became known as Hyde Villa.

On the southeast corner of Kutztown Road and Elizabeth Avenue once stood Hoyer’s School, built around 1851. It was to this one-room brick structure that children of Frymire/Hyde Park originally went. On the first day of classes 91 pupils showed up. A two-room replacement was erected back from the corner, which survives as an apartment complex. 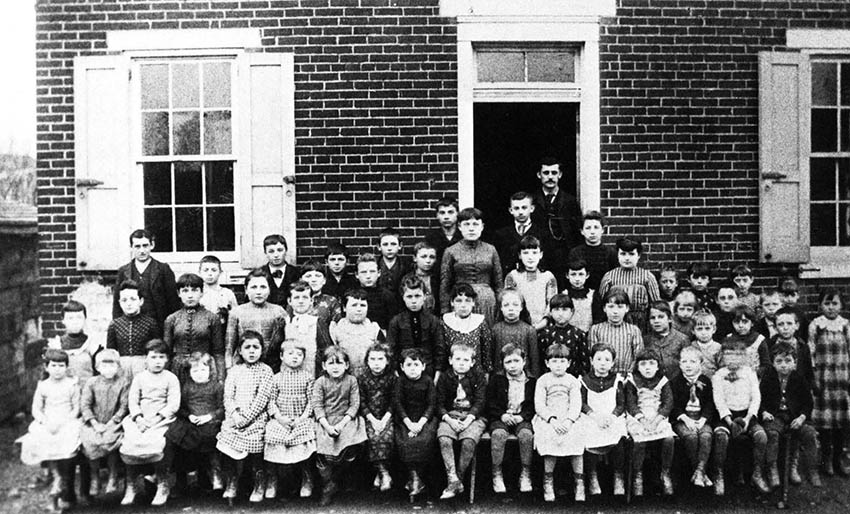 By the time old Hoyer’s was razed, Hyde Park children were no longer in attendance. They had a two- story school of their own at the southeast corner of Lafayette and Pennsylvania avenues, near Frymire’s Hotel – in those days, the heart of the settlement.

Below: This muddy road way is Pennsylvania Avenue, looking south to Madison Avenue, prior to World War I. The house on the extreme right is at 410 Pennsylvania Ave. At left is Hyde Park School No. 1. Behind it is the rear of Frymire’s (Freymoyer’s) Hotel whose cupola – once struck by lightning – no longer exists.

Hyde Park School No. 1, as it was called, caught fire around 1916 as a result of out-of-control leaf burning. Pupils vacated the building in an orderly fashion and most of the books were saved, but the building was badly damaged. During repairs, classes were held on the second floor of Yetter’s Pool Hall, corner of Bernhart and Kutztown Road.

Around the turn of the century another (slightly larger) two-room, two-story schoolhouse was constructed on Pennsylvania Avenue, a half-block away from the earlier one.

Hyde Park School No. 2, located at 421 Pennsylvania Ave., sits considerably back from the street. By 1900, authorities finally realized the value of the adequate play space around the schoolhouse.

For years, school No. 2 had been used for Sunday school classes. When it was closed around 1917, following the opening of the Hyde Park School on Raymond Street, the Goodwill Fire Company used the structure as its social quarters. Later, a motorcycle club used it. Around 1940, John Hurst converted the place into a residence.

Below: An old log cabin, now covered with siding, at 3015 Kutztown Road appears on the 1854 Henry & Boyer Berks map as the Kerling’s Tavern. At first glance, one might suppose such a modestly-sized building would be too small to serve as a “way-stop.” 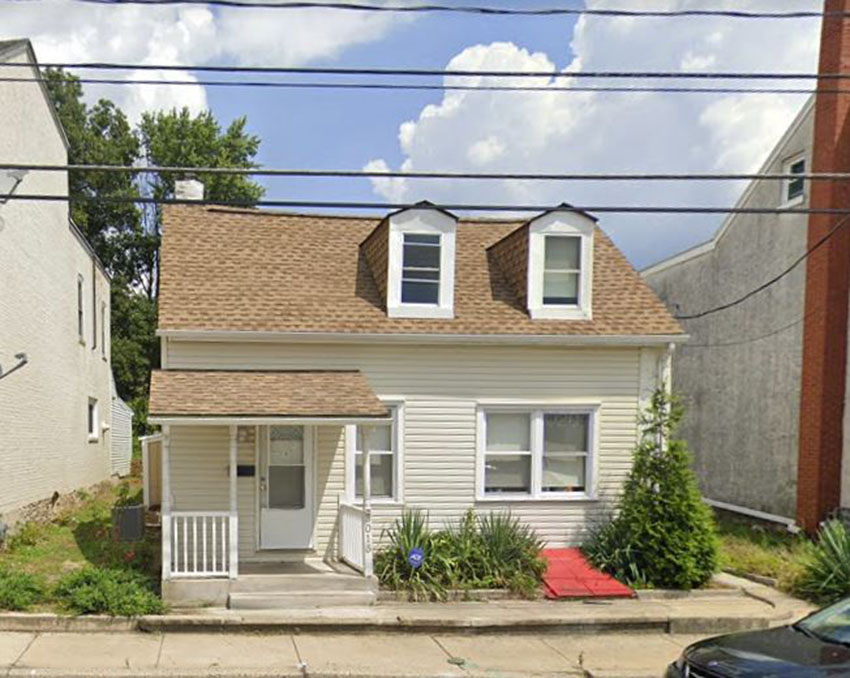 In the last century, numerous taverns of this size existed. Often the bars were only 5 feet long. What happened was that the successful “stops” usually were enlarged or completely rebuilt to meet the need.

Around 1855, Kerling’s Tavern went out of business. Thereafter, the building was used as a dwelling.

About the time Kerling closed his tavern, a Mr. Geiger opened a modestly-sized, frame two-story inn long known as the “Cross Keys.” Be apprised there were at least 10 other “Cross Keys” hotels scattered throughout Berks County.

After Geiger’s death, his widow ran the place for a time and then sold it to Edwin Becker. It is supposed John Becker built the brick inn that was constructed right against the old one, which then became living quarters. An 1883 map shows the name having been changed to Belleview House.

The Belleview House (or hotel) changed hands quite a few times. Proprietors after the Beckers included: G. L. Hunsberger; AI Golden, who later became well known as an automobile dealer; Livio DeCarlo; and Frank Upczak, who ran the business until the late 1930s. Mr. Upzak was the last proprietor.

After the property stood idle for a period, a Mr. Fogelman bought it, tore away the early frame portion, and renovated the brick part into apartments.

In its day, the Belleview was a popular stopping-off point among travelers and farmers en route to and from the Reading markets. There was a hostler always on duty; the livery stable facilities were superior.

Were the wayfarers of old to return, they probably wouldn’t recognize the place. In addition to the modification previously noted, the long porch has been removed and the brickwork is now painted white. The former hotel’s location is at 2929 Kutztown Road, nearly opposite Miller’s Store.

At 3037 Kutztown Road stands a large, brick lodge hall erected in 1890. Then as now, this attractive white building, which is a credit to the community, houses Washington Camp No. 68 of the Patriotic Order Sons of America. 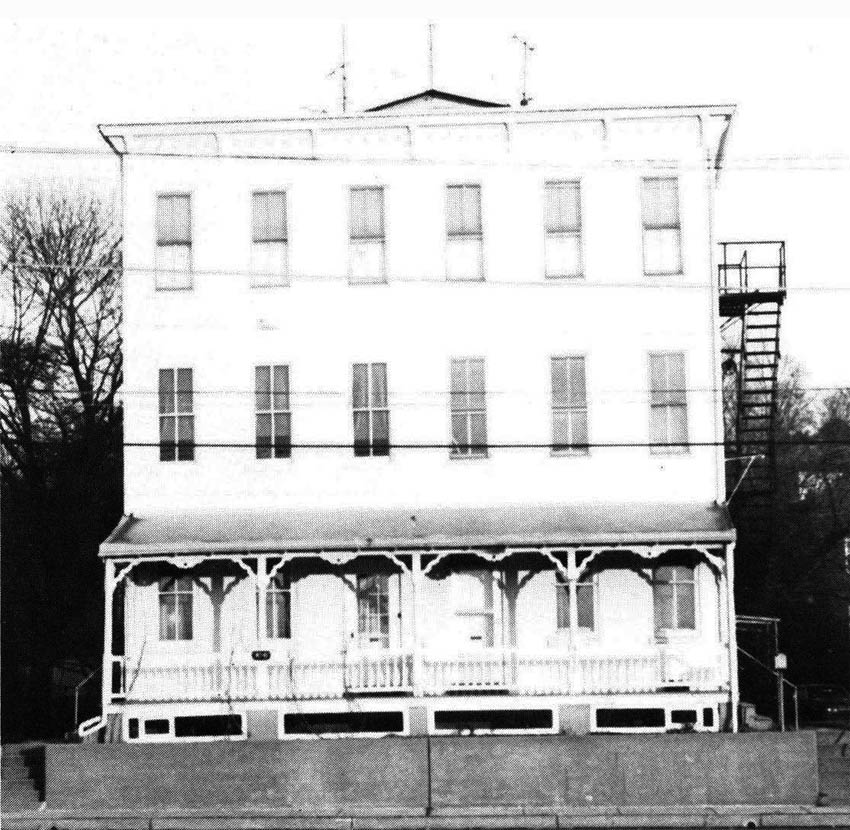 In 1900, Knights of the Golden Eagle built a fine stone lodge hall at 2851 Kutztown Road, one distinguished by a splendid three-section stained glass window of considerable size on the top story. Regrettably, this feature no longer exists. 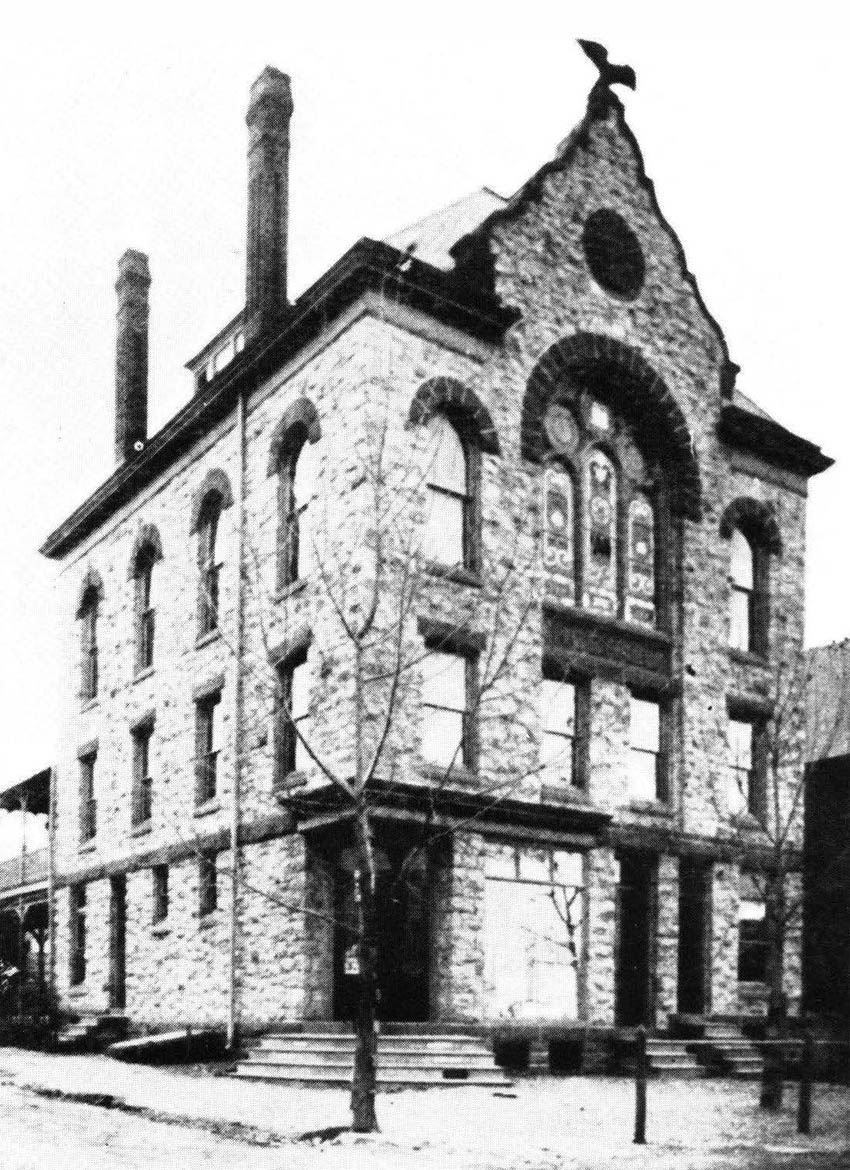 On the first floor, Howard P. Schaeffer ran a grocery store and conducted the “Bernharts” post office. Many postcards of the Hyde Park area were published and sold by Schaeffer during his years in business.

On April 1, 1948, Schaeffer retired as postmaster, at age 70. George F. Ulle, who had worked for Schaeffer since Nov. 1945, became acting postmaster. Following Ulle’s appointment as official postmaster of Bernharts on Sept. 16, 1949, the post office was moved to 2947-49 Kutztown Road, where it remained until closed on March 1, 1950.

Contrary to popular belief, the postal designation of Bernharts was not established by Schaeffer at his store. It originated at the nearby hamlet of Bernharts, the heart of which had been the Spring Valley Hotel.

Between Spring Valley Road and the railroad, on land now owned by the Bachman (pretzel and food) Co., Jefferson M. Keller once had large wooden icehouses, which he erected in 1885. Ice was cut from a seven-acre pond on the premises. Much of Keller’s complex was destroyed by fire.

On this site the Muhlenberg Brewing Co. built a large brewery in 1885. Some 10,000 barrels of beer were manufactured annually. For much of its existence, until the late teens, Simson Becker was president of the firm.

A chewing gum maker took over the brewery building and produced goods until a fire seriously damaged the structure, the second in its history.

The gum business had a relatively short life. From all indications it was begun in the early 1920s by Percy and Henry Short of 1503 Pricetown Road. In the mid-20s, the following group ran the company; J. G. Maurer, president; Harry Maurer, treasurer; and Martin Eshelman, secretary.

Later it was known as the Reading Chewing Gum Company, Inc. Tamah Rahn of Raymond Street remarked in a 1975 interview that she worked for the firm for a very brief period. She recalled handling nothing but orange-flavored gum – mountains of it!

Perched at the head of Seminary Road stands St. Michael’s Convent, originally a seminary for the education of young ladies. It was founded by direction of the last will of Henry F. Felix in 1894, who left money for a 50-acre tract and a building to be erected thereupon. Felix was a well-known Readingite who became quite wealthy, mainly through the manufacture of boots and shoes.

When opened in the 1890s, St. Michaels was conducted by sisters of the Immaculate Heart of West Chester. For whatever reason, that order didn’t remain and the premises stood idle.

Below: This is  building as it appeared in the late 1890s. For nearly 60 years the seminary’ served as the motherhouse and novitiate for the Sisters of the Sacred Heart. The structure has been modified considerably. Now attached to the left side is a brick wing erected in 1921. 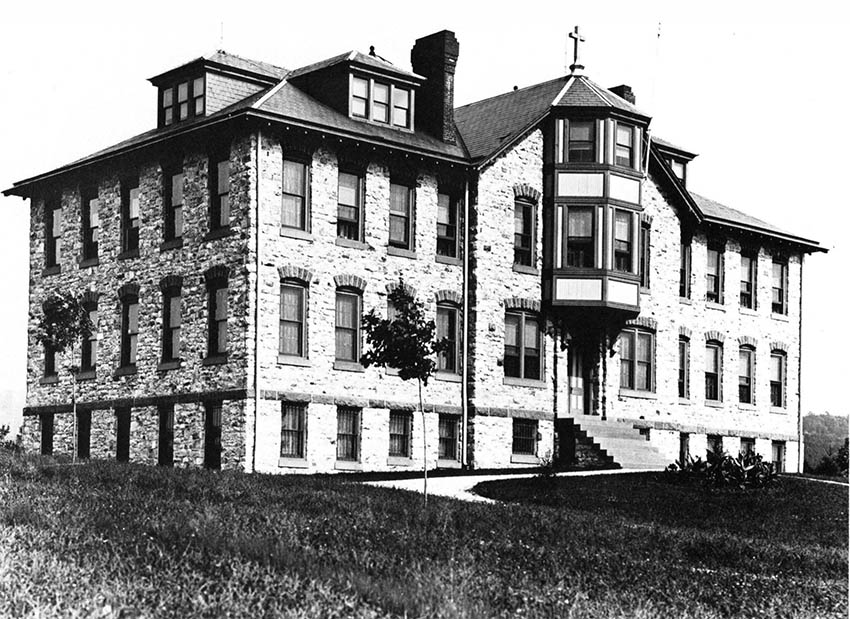 Monsignor George Bornemann, who controlled the property, renovated the building to serve as a tuberculosis sanitorium of the highest caliber.

At the time, he was searching about for sisters to staff it, the Missionary Sisters of the Sacred Heart had come to the United States from Germany with the idea of teaching the hordes of recent immigrants on our shores.

As the German sisters were in need of a motherhouse and headquarters, and Bornemann needed staff, an arrangement was made that proved mutually satisfactory.

The Sanitorium existed for a rather short time. Thereafter, the seminary building was again renovated for educational purposes and as a novitiate. Girls of the Hyde Park area, many not Catholic, sometimes attended classes there in the summer.

The stone “Felix building” today serves as a center for workshop gatherings, lectures, and conferences for the order. A 1955 building on the grounds is now used for residential purposes.