The Civilian Conservation Corps (CCC) was a public relief program for unemployed men ages 18 to 24 to provide unskilled manual labor for conservation and development of natural resources beginning in 1933. President Roosevelt promoted the CCC for youth unable to find jobs during the Great Depression. It was implemented in every state and was the most popular of FDR’s “New Deal” programs; relief was given to 3 million young men.

Workers of a Civilian Conservation Corps. (CCC), established in the Fall of 1933, helped in various projects in the Mount Penn Parkway System, including the construction of Skyline Boulevard.

Early on, they lived in tents. The CCC planted nearly 3 billion trees to help reforest America and constructed more than 800 parks nationwide. Enrollees worked 40 hours a week over five days, sometimes including Saturdays if poor weather dictated. In return participants received $30 a month, as well as food, clothing and medical care.

In 1936, the CCC grounds “off the Pricetown Road” were converted for use by the National Youth Administration (NYA), which was another New Deal agency that came into existence in 1935. While linked to the Works Progress Administration (WPA), it was geared to high school and college youth who were paid from $6 to $40 a month for “work study” projects at their schools. Unlike the CCC, it included young women. The youth normally lived at home while working on construction or repair projects. In essence, it was a job-training program. In Berks, in 1936, about 700 young men and women were enrolled. Of this number, 450 were students in high school, college, and rural schools. Each received $5 a month to pay for lunches and carfare, in exchange they helped to catalog library books, read to blind students, assist in clerical work and tutor “backward classmates.” Locally, the NYA had ties to the YMCA.

A Reading Eagle article in Dec. 1940 reported that Reading held title to the 18-acre parcel which was leased to the government. Prefabricated steel buildings were planned for the site. Boys enrolled here were to be trained as skilled mechanics for national defense purposes. Barracks would be provided. The outset of World War II the following year brought the country out of the Depression, and soon activity’ at the former CCC / NYA grounds ceased.

Below: “The Driscoll farmhouse” (2611 Hampden Blvd.), seen in the far background of the NYA complex, was used as temporary headquarters until the NYA buildings were completed. The Driscoll barn, partly visible on the left, is now the Crab Barn restaurant. On the right is the entrance to the Reading Muhlenberg Career and Technology Center, built on the site of the CCC / NYA grounds. 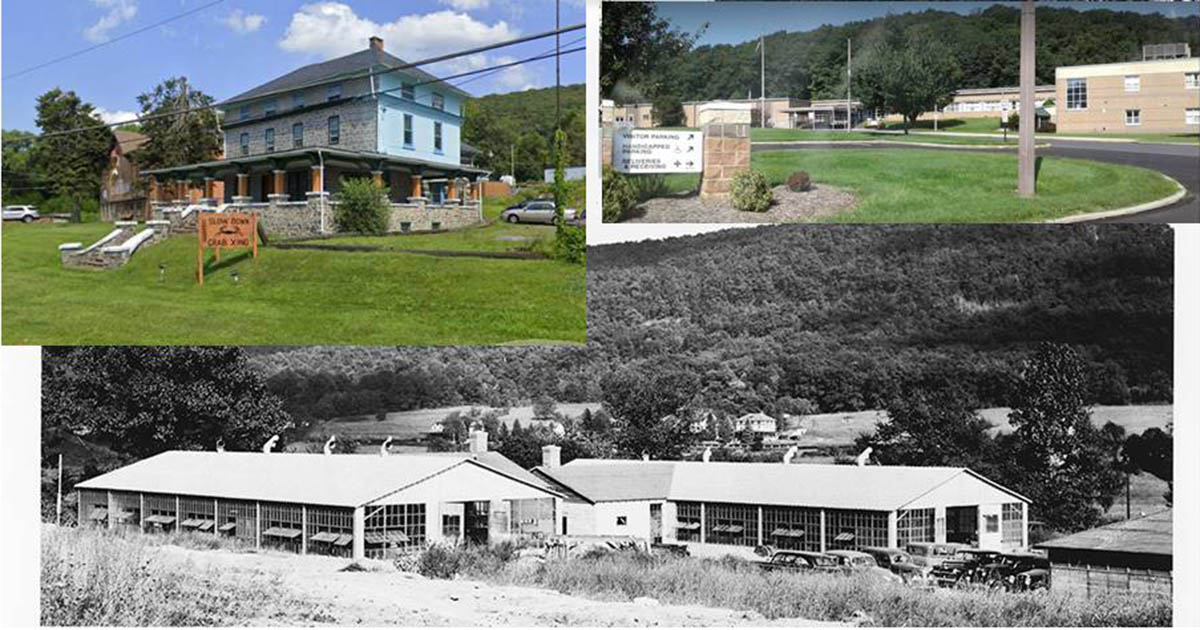