Christmas was Different here 100 years ago

Christmas was Different here 100 years ago

City fathers 100 years ago were screaming about the double parkers on Penn Street, and citing a city parking ordinance prohibiting the parking of a vehicle in front of any hotel, hospital, church or public building.

In 1922, most of the shoppers came to downtown Reading in trolley cars. Still – in that year, when one could purchase a new four-cylinder, five-passenger Nash for $935, or a new Cadillac for $2,885 – there were so many cars coming to Penn Square that city council decided to banish most of the trees and tree hawkers from the main streets, to cut down on traffic congestion.

Previous to 1922, huge evergreens at 5th and Penn and smaller trees in boxes along the curbs and trolley tracks in Penn Square were part of the yuletide decorations. And so were the display and sale of Christmas trees along Penn Street.

Below: 400 block of Penn Square, circa 1907. This is the only known view showing what appear to be lines of freshly erected fir trees on the square – for the Christmas season. Careful examination reveals a number of inordinately large fir trees stacked against the merchant wagons – on the left side of the photo. Another anomaly is that only one automobile is anywhere to be seen, despite the fact that by 1907 there were dozens of horseless carriages (gas and steam) in the greater Reading area. 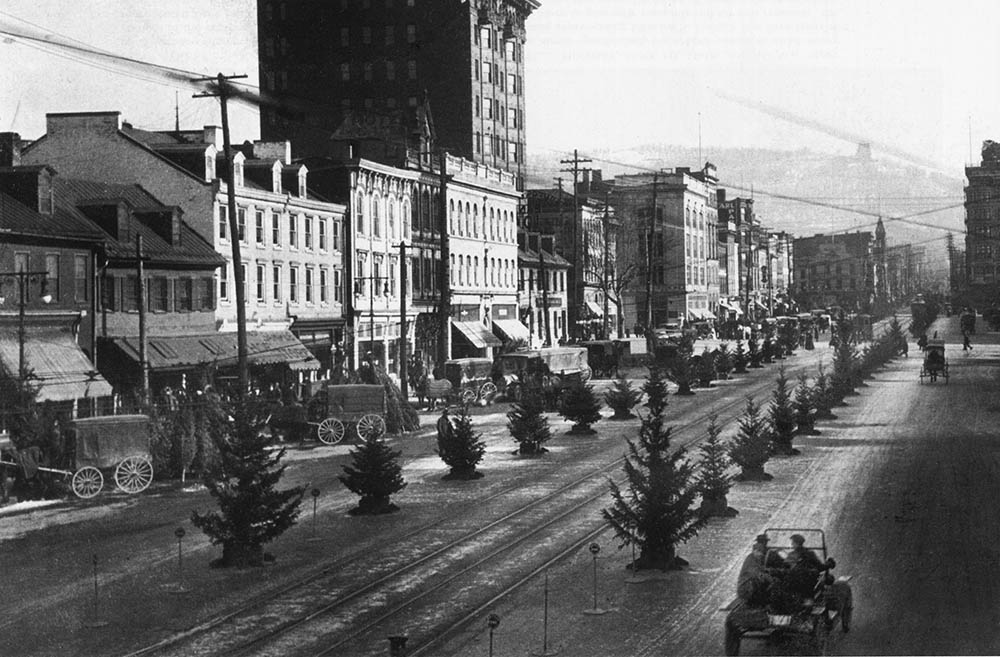 Then, in 1922, city council, because of traffic congestion and unsightly appearance, barred vendors from hawking Christmas trees on Penn Street, making them use pavement space at local school buildings for the sale of their seasonal trees.

And, because of increased traffic on Penn Street, city fathers of 100 years ago decided to confine the holiday decorations to the erection of one huge evergreen at 5th and Penn, which was lighted with hundreds of electric bulbs in red, green, purple and white.

On Christmas Eve of 1922, thousands of persons gathered on Penn Square to hear a large group of carolers, preceded by bell ringers, sing those old yule favorites to the music of the Ringgold Band, and to add their voices to the joyful night.

The Christmas eve program was as follows:

The Christmas day program was as follows:

3.25 – Distribution of candy. The band ‘will play during the distribution.

Most Readingites were less prosperous in 1922, but there was plenty to buy if one had the money as he walked past painless Dr. Gould (atop the Newark shoe store at 636 Penn) who advertised “Painless Dentistry and Painless Prices!”

The windows of such stores as Whitner’s, Dives, Pomeroy & Stewart, Kline, Eppihimer & Co., Ellis Mills, Sondheim’s, the Bon Ton and Weiss’ were ablaze with lighted Christmas decorations and bargains of all sorts.

Dad of 1922 had his eye on a $150 model Victrola at Wittich’s but settled for two new Victor records – “Don Cesar de Bazan,” sung by Nellie Melba, and “Carolina in the Morning,” played by Paul Whiteman and his orchestra. He then walked up to I. Williams, the tailor at 857 Penn, where prices “start at $1 a leg,” to buy a new pair of pants.

Mom of 1922 had her eye on a skunk-trimmed Hudson seal coat selling for $350, but settled for a Nulife self-lacing corset “to give you an individual figure of perfection.”

Junior and Sis of 1922 wanted a lot of the many toys available, but the former wound up with a pocket Ben watch and the latter carried home a doll.

In this year of 1972, the whole family is demanding everything from a new color TV set to a foreign model car with a rotary engine. As for the dog, he could wind up wearing a “Dr. Zhivago” coat or a Nehru jacket.

A check with Mrs. Maris Spatz’s Dog Salon in Hyde Villa disclosed a wide variety of sartorial finery available for Fido, ranging from snowsuits to turtleneck sweaters. As for luxury items for the pooch, there are books, including dog horoscopes and “Sex and the Single Dog.” How times have changed!