At the crossroads of Penn’s Common

At the crossroads of Penn’s Common

The Penn’s Common area of the city, or “City Park” to the unenlightened, took on a mix of characters during various phases of its development.

When much of the city east of the Seventh Street railroad tracks was largely undeveloped for most of the 19th century, the Penn’s Common area to the west and north of City Park housed most of the city’s blacks.

Below: In this turn-of-the-century view of Penn’s Common, the Berks County Prison dominates the head of Penn Street. Built in 1848 in the then-popular medieval Norman castle penitentiary style, the prison was demolished in the early 1940s. It was designed by John Havilond, the premier prison architect of his day, who also designed the prison still in use in Pottsville. 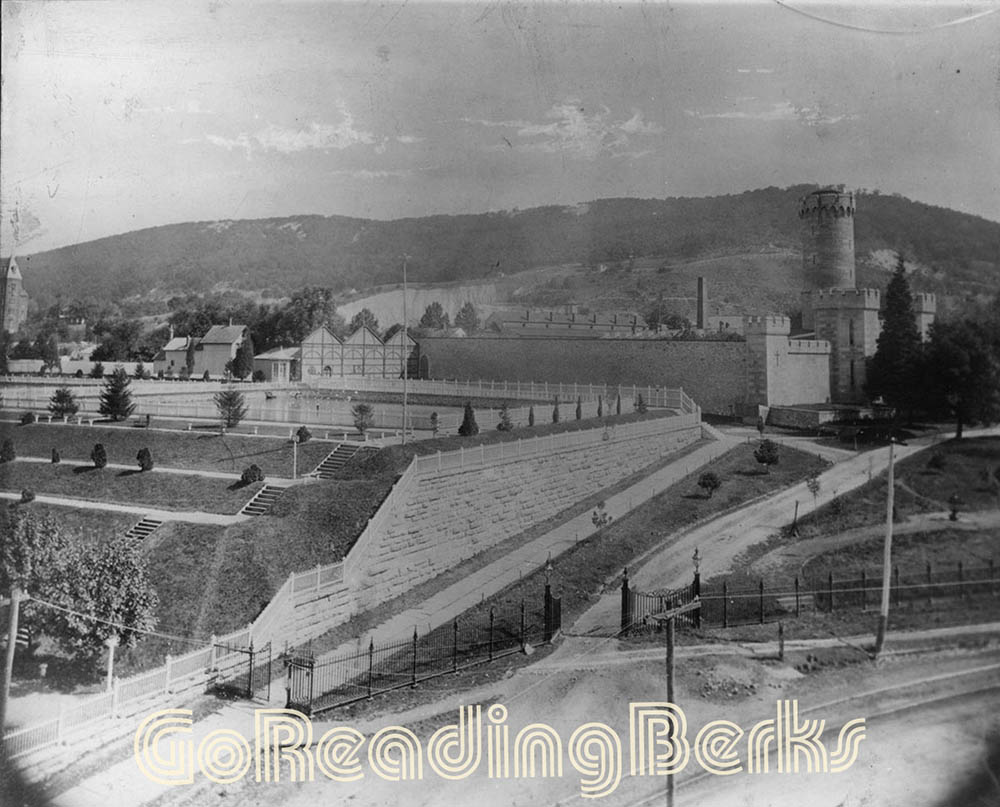 Free men and freed slaves, the blacks were concentrated in the area around 10th and Washington streets, and Mulberry Street until late in the century was known as Black Alley.

Reading’s early black population was mostly composed of laborers and tradesmen, and many built their own homes. The city’s first black church, The First African (Washington Street) Presbyterian Church, started in a log cabin at Washington and Mulberry streets in 1823.

Bethel African Methodist Episcopal Church at 119 N. 10th St., now known as the Central Pennsylvania African American Museum, was originally built in 1837. Though greatly enlarged and renovated over the years, the original church is still part of the structure.

What other development there was in the early part of the city’s history was largely commercial and centered on Penn and Ninth streets.

Penn Street, part of the route of the Tulpehocken Road, the main route to Philadelphia, and it was the only street in the town busy enough to boast that the grass didn’t grow there.

The most notable early business was the Fountain Inn, a two-story stone tavern at 1016-1018 Penn St., built around 1752 and the only building in the city at the time with running water.

The Fountain Inn was a popular Revolutionary-era watering hole.

It was known as the Fountain Inn, as there was in front of it a fountain with a large trough for watering horses. A wooden pipe had been laid up to a spring in Penn’s Common.

At that time there were no canals or railroads, and everything was hauled in wagons, the people traveling with their own teams or in stages, and Fountain Inn was a great watering place. The interior woodwork showed fine workmanship and the ceilings were ornamented with artistic moulding. It was up to about 1812 one of the first -class inns.

The area slowly filled up with tradesmen and laborers, with most of the buildings small on 60-foot-wide lots, featuring a driveway through the lots to stables at the rear of the houses.

The most intensive development of the area occurred after the Civil War and before 1890, and as the small buildings on 60-foot lots were removed and replaced, the area became one of the most densely populated areas in the city.

Most of that development revolved around the businesses which sprang up in the area because of the growing importance of Penn Street, Ninth Street, and their intersection.

The intersection became the focal point for trolley lines in eastern Reading in the last two decades of the 19th century, and the terminus for the two electric railways serving the resort areas in east Reading and on the mountains.

The trollies both attracted commercial business, and allowed tradesmen to commute to work in other parts of the city.

Probably the most prominent tradesmen in the district were barbers. Amos Gable started off as a barber, but by the end of the century, he was one of the nation’s most prominent portrait painters, operating out of a studio at 11 North Ninth St.

Amos Gable was born in Reading February 2, 1840, and was the son of Joseph and Wilhelmina Gable. He received his education in the common schools of Reading and at the age of 12 was apprenticed out to learn the barber trade in Philadelphia, where he remained for six years, after which he returned to Reading and followed the trade for about six years, conducting a barber shop on Penn street.

During the time he was in business in Reading he turned his mind toward art, for which he had shown great talent from childhood. The greater part of the six years he was in business he studied under the tutelage of the well-known artist, F. D. Devlin.

Following his retirement from business he made a tour of the great galleries of Europe. Upon his return to this country and at the insistence of his aunt, Mary Jane Porr, of Germany, he decided to make art his future life work. During the early days of his career he painted some excellent examples of still life and landscapes, but in later years turned his hand to portrait work, at which he created a name for himself, known throughout the art world. He was counted among the leading, if not among the greatest of American, portrait painters, his work adorning many of the famous homes and public buildings of this country. His patronage covered the entire country, hardly a section of which but contains at least one portrait from his brush.

The four Terry brothers, free blacks, owned and operated their own barber shops in the downtown area, and became the city’s most prominent black citizens of the century.

Moses Terry, who had a barber shop at 501 ½ Penn street, remembered in later years that scarcely a week would go by before the Civil War that he wouldn’t be called by railroad officials to handle “special baggage” – runaway slaves.

Moses Terry was born in Virginia, on the plantation of a slave-owner, but was not a slave. In 1851 he located in this city and became a barber. He was a member of Washington Street Presbyterian Church, of which he was treasurer and a trustee.

The Underground Railroad had the local support of officials of the real railroad and a large number of other citizens, and several runaway slaves did settle in Reading’s black community.

With most of the Penn’s Common area densely built by tradesmen and laborers by the 1890s, development after that concentrated around City Park.