The City of Reading has witnessed the appearance and disappearance of numerous newspapers since the origin of the town’s existence. The first newspaper appeared in 1789. In December of 1912 the “Reading News” came into being as an independent morning newspaper “with an aim to be fair to everyone and to be a booster for Reading.”

The “Reading News” building was built on March 26, 1912. Its Beaux-Arts styled building located at 22-24 North Fifth Street was erected by local contractor William A. Sharp using a large force of men to compensate for a series of delays in shipment of essential materials during its initial phase of construction. The Beaux-Arts style heavily influenced the architecture of the United States in the period from 1880 to 1920. Beaux-Arts architecture depended on sculptural decoration along conservative modern lines, employing French and Italian Baroque and Late Baroque style with an impressionistic finish and realism. The facade of the building was finished with brick and granite.

The building was especially designed for newspaper, completely fireproof, built with steel girders, concrete floors and a terra cotta exterior with limestone trimmings.

The first floor was structurally reinforced by extra steel columns in the basement. The first floor contained business offices and the press room. The press itself was known as a four deck Goss Straightline. This machinery, when it was installed, could be seen from the sidewalk through a large plate glass storefront window, a tactic once commonly practiced to engage public interest. The Goss Straightline press had a capacity of 27,000 16-page papers an hour or half of that many 32-page editions. The massive machine sat on concrete columns level with the street.

Editorial matters were handled on the second floor. There were separate rooms for news preparation, the editor, the society editor, and “the morgue” – a storage area for photographic materials and reference sources.

The third level contained the composing room and stereotyping department. Here the paper was set up and metal plates were made from photographs to provide printed illustrations. Finished plates or “cuts” were transferred to the press room by special elevator, as were the galleys (trays that held composed type).

The Reading News was published by The News Corporation whose officers were Gilbert S. Jones, president and general manager, and M.A. Vansant, secretary and treasurer. Albert W. Cummings served as editor.

Managing editor was Harrison Baldwin, originally from Erie. Associated with him was Edward J. Deininger who had been with the Reading Eagle for 14 years before joining the “Reading News” staff.

An ad in a theater program of mid-1913 states “The Reading News has broken all records and wins and holds its readers solely on its merits. It thoroughly covers local events…county, state and national happenings…and affairs of the world.”

Management guaranteed to have the paper delivered to all homes before breakfast, Monday through Saturday, for $3 a year. Daily circulation was quoted at 12,000. As basis for comparison, the Reading Eagle then had double that circulation and sold for $6.50 per annum, which included a Sunday edition.

Entering into and competing in the newspaper business was never easy. Considering that most families purchase only one paper, The “Reading News” had to be prepared to woo readers away from not only the top-ranking Reading Eagle but other major dailies as wel…the Reading Times, Reading Telegram, and Reading Herald. The latter was right across the street and enjoyed enviable popularity.

It was soon evident greater Reading simply could not support five full-time newspapers. Something had to give. Within two years something did.

In 1914, the “Reading News” was purchased by the Times. What resulted was a combined publication named The Reading News-Times, a designation that endured nearly a decade.

In 1919, when Dudley H. Miller was president, managing editor of the News-Times was Frederick S. Fox, son of Cyrus D. Fox. Frederick died in 1968 at the age of 93, having spent 64 years of his life as a journalist.

William McCormick, founder of four Olivet Boys Clubs, leased the News-Times on March 1, 1920, and served as editor and publisher until his death three years later. McCormick also issued the combined Herald-Telegram, an afternoon daily, from the same plant at Sixth and Walnut.

The Times changed greatly following its acquisition in 1923 by John H. Perry, a resident of New York City who owned a chain of newspapers. He chose as editors men whose style was vigorously liberal.

With the Perry take=over, the News-Times and the afternoon Herald-Telegram were consolidated into one morning newspaper, the Reading Times.

In 1926, the Reading Tribune, an evening paper published at 504 Penn St., was bought out and also absorbed. Henceforth, Reading had but two major dailies, the Reading Times and the Reading Eagle.

In 1938 the Reading Eagle Company moved from Sixth and Penn streets to 340 Court St./30 N. Fourth St. In 1940, John H. Perry sold the Times to the Reading Eagle Company. At that time the late Hawley Quier was publisher of the Eagle. Soon thereafter the two newspapers were united in a single plant at 30 N. Fourth St. The staff of the two papers was combined in 1982. In June 2002, the Reading Times ceased publishing, and the Eagle became a morning paper.

Below: The Reading News Building (2nd from left) is shown in this 1961 photo. 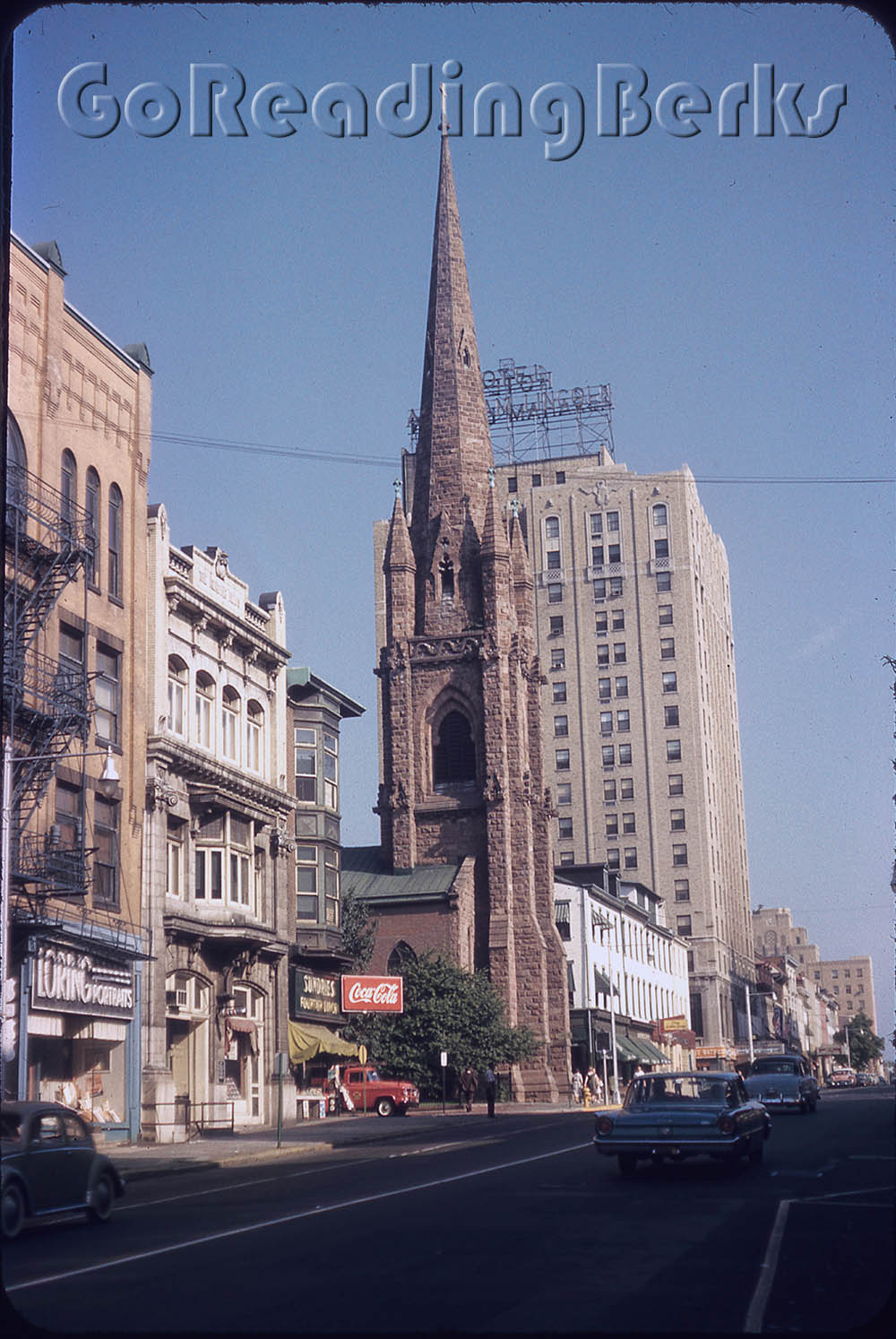 The richly detailed Beaux-Arts facade of the “Reading News Building” was removed to 431 Penn Street in 1982. Preservation of this striking example of the Beaux-Arts type of classical revival architecture was a key component in American Bank’s 6-million-dollar “Keystone Project” which involved removing all structures from the rear of Colonial Trust to the corner of 5th and Court. The removal allowed for construction of a building that served, for a period, as a processing center. Included in the Keystone Project were commercial buildings from 431 Penn to the American Bank (formerly Berks County Trust’s headquarters) at the northwest comer of 5th and Penn. Removal of the facade of Reading News and applying same to 431 Penn was a major undertaking that involved great skill and much planning. Reading-based Eshbach Brothers were put in charge. End results were a near-miracle of perfect transplantation.

Below: The richly detailed Beaux-Arts facade of the “Reading News” building was removed to 431 Penn Street in 1982. The first floor facade is composed of two equal arched openings. Within the openings are entrances and storefronts topped by leaden glass transom windows.

The first floor facade is composed of two equal arched openings. Within the openings are entrances and storefronts topped by leaden glass transom windows. At the second level the facade is divided into three openings. The end two windows occupy 1/4 of the facade while a center bay window occupies the middle half. The end windows have flat arch lintels. The bay window is three sided with casements at the sides and a plate glass window in the center. Leaded transom windows are above. The third floor is divided into four equal openings. The window openings have low arched lintels. The windows are casement. There is a plate glass opening inside the building in the main foyer where one can observe the printing presses. This plate glass window is on the north side of the foyer and it is approximately eight feet wide. The rear of the building has 20 sash windows in groups of two with the first floor having larger windows, topped by clear leaden glass transoms. The steel staircase is illuminated by a skylight.

The roof is flat with a low slope composed of asphalt slag. The cornice is made of limestone and supported by five stone brackets. The parapet line is topped off by an open stone balustrade centered with a stone carved panel which reads “The Reading News.” On either side of the building are brick pilasters which reached a few feet above the cornice. These are decorated with a carved silhouette of helmeted figure with pendant grapes. The third floor is of a light yellowish brick while the first and second floors are faced with stone limestone blocks. At the third floor level there is a pent cave or limestone cornice supported by 17 dentils. This part of the building is decorated with two stone fluted pilasters topped by scroll work and with grape motif. A curious, if not awkward, feature of the building was a low sloping rectangular roof which surmounted the three sided bay window. This roof appeared to be made of concrete. It emanated from the intersection of the underside of the cornice at the third floor level and projected approximately 16 feet past the bay window. The cornice of the bay window roof was ornamented in a style reminiscent of a Japanese tile roof. A first floor cornice completed the tripartite division of the building. This cornice was made of the same stone material as the other two cornices, but protruded along the lines of the bay window. A central, nearly four feet high stone bracket underneath the bay acted as a central focus. Two stone brackets of smaller dimensions were situated on either side of the main bracket.