A second parish for Polish Catholics in Reading, St. Anthony of Padua

A second parish for Polish Catholics in Reading, St. Anthony of Padua

As a number of immigrants from Eastern Europe continued to migrate to the shores of the United States in the early pan of the twentieth century, a group of people of Polish descent sought to establish a second Polish parish in Reading on the west side of the Schuylkill River.

With the population beginning to branch out from the center part of Reading, the trek across the Schuylkill River to St. Mary’s Parish at 12th and Spruce Streets in Reading was becoming a hardship for an increasing number Catholics of Polish ancestry. As had been a pattern seen so many times in the formation of new Catholic parishes in Berks County, Monsignor Bomemann was there to assist the faithful in their quest to establish a new faith community. On April 12, 1914, the new parish of St. Anthony’s of Padua was founded with the assistance of the Right Reverend Monsignor George Bomemann who aided the committee of the newly formed parish to secure ground in a vacant church in Millmont for the sum of $2,000. This original church of St. Anthony’s was built in 1894 and was first utilized by members of a Ukrainian Greek Catholic Chinch. Still later, Catholic Slovaks used it until they built the new church, the Church of Saints Cyril Methodius, at Sixth and Laurel Streets in Reading. 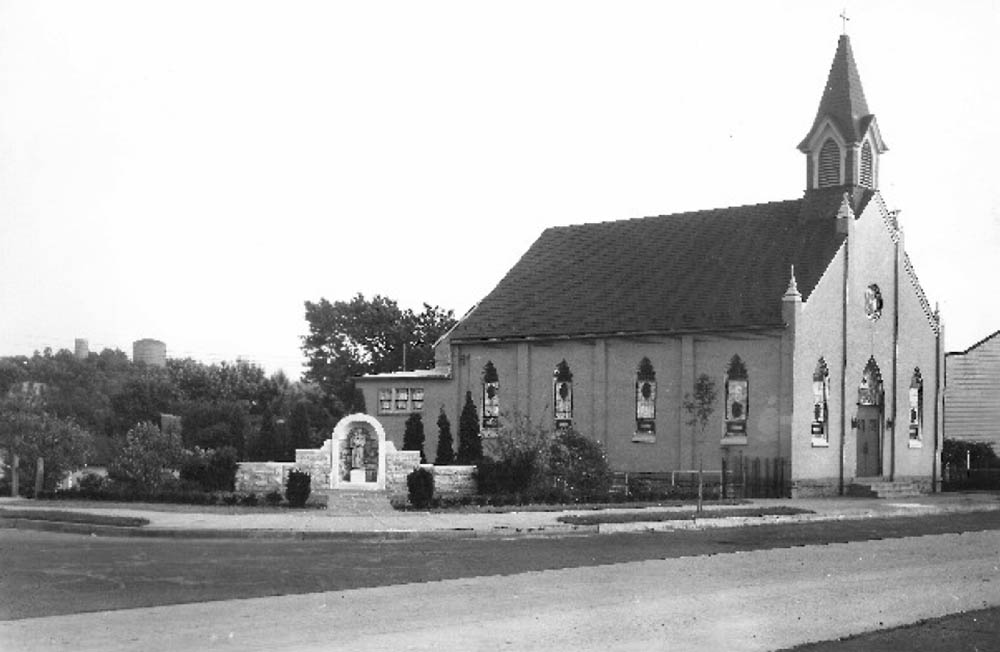 Below: The interior of the original St. Anthony of Padua Church. 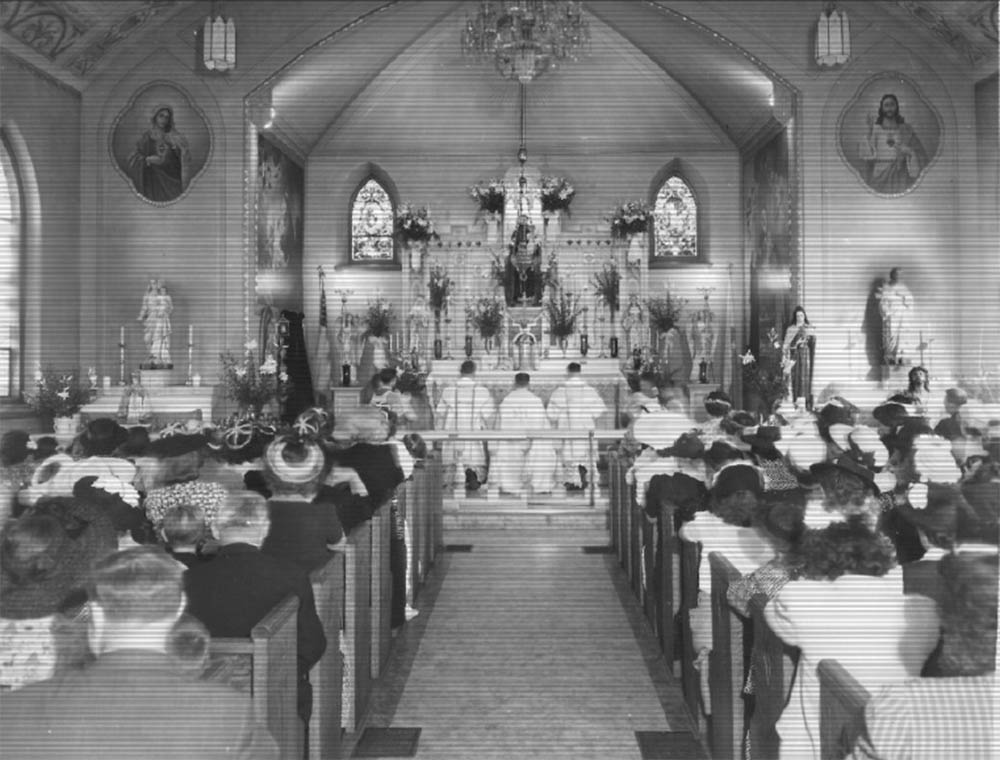 The first pastor of St. Anthony of Padua was Father Peter Kucharski, who was the chaplain at the nearby Bernardine convent. The cost to renovate and liturgically outfit the interior of the church was $1,530. This would include a new church steeple along with the bell that would call the faithful for Mass. Father Adalbert Malusecki, Pastor of the other Polish parish in Reading. St. Mary’s, would dedicate the ground and bless the church.

As with the other parishes established in the Reading area, the commitment to providing a Catholic education for the youth of the parish was strong, and thus soon after the establishment of the parish in 1914, two classrooms were added in the basement of the chinch. Two years later a rectory was established.

Father Kucharski’s time at the parish would be short. He would be replaced by the second pastor, Father Michael Pachucki in 1918, who served only three years before the third pastor of the young parish, Father Michael Strzemplewicz, took charge on July 10. 1921. Father Strzemplewicz would be the third pastor of the parish in the first seven years since the parish was formed in 1914. His tenure and that of his successor would provide stability to the parish for the next half century.

With his health failing in September 1939, Father Strzemplewicz would leave the parish and Cardinal Dennis Dougherty, Archbishop of Philadelphia, would appoint a young priest, Father John S. Dunajski, to serve as administrator of the parish. When Father Strzemplewicz passed away on May 3, 1940, Father Dunajski was appointed the fourth pastor of the parish on May 7, 1940 and would remain pastor for over three decades before retiring in 1971.

Many noteworthy events occurred during Father Dunajski’s tenure as pastor. The church was renovated and the parish celebrated its silver jubilee on October 11, 1940. In addition, the church basement was remodeled, a larger sacristy was built and the St. Anthony’s Grotto (as seen in the picture of the original church) was constructed. As with all parishes, the history of the parish had its challenges, including a fire that occurred on the night of March 4, 1956, that completely burned out the sacristy and caused extensive smoke damage to the interior of the church. Under Father Dunajski’s leadership, the sacristy and the interior of the church were completely renovated and redecorated within a year.

The need for new facilities became evident in the 1950’s and groundbreaking took place for the establishment of a new parish school, auditorium and meeting rooms. On April 7, 1957, ground was broken for this new educational facility, which was completed in May 1958 at a cost of $250,000. Archbishop John F. O’Hara of the Archdiocese of Philadelphia dedicated the facility on May 3, 1958. Later that same year, on December 15, 1958, the new Holy Father, Pope John XXIII, would bestow the title of Cardinal to John F. O’Hara. The nearby Bernadine Sisters would open the newly built school in September 1958 with 134 students.

The parish would celebrate its fiftieth anniversary with a special Mass on May 17, 1964 with the Most Revered Joseph P. McShea, Bishop of Allentown, as the principal celebrant for the 4 PM Mass. The Mass was followed by an anniversary dinner in the school auditorium attended by over five hundred people.

The parish rectory was built in 1962 and St. Anthony’s Convent was erected for the Bernardine Sisters in 1966.

Father Dunajski retired in 1971 and Father Stephen J. Halabura was appointed as the fifth pastor. Father John S. Dunajski would pass away on March 6, 1990, at the retirement facility for priests of the Allentown Diocese, Holy Family Manor.

Just three years into the pastorship of Father Halabura, plans were made to build a larger church on the site of the existing church. The old church was razed in August 1974 and groundbreaking for a new church followed. The late Bishop Joseph McShea, founding bishop of the Allentown Diocese, dedicated the new church in October 1975.

Below: The new St. Anthony of Padua Church. 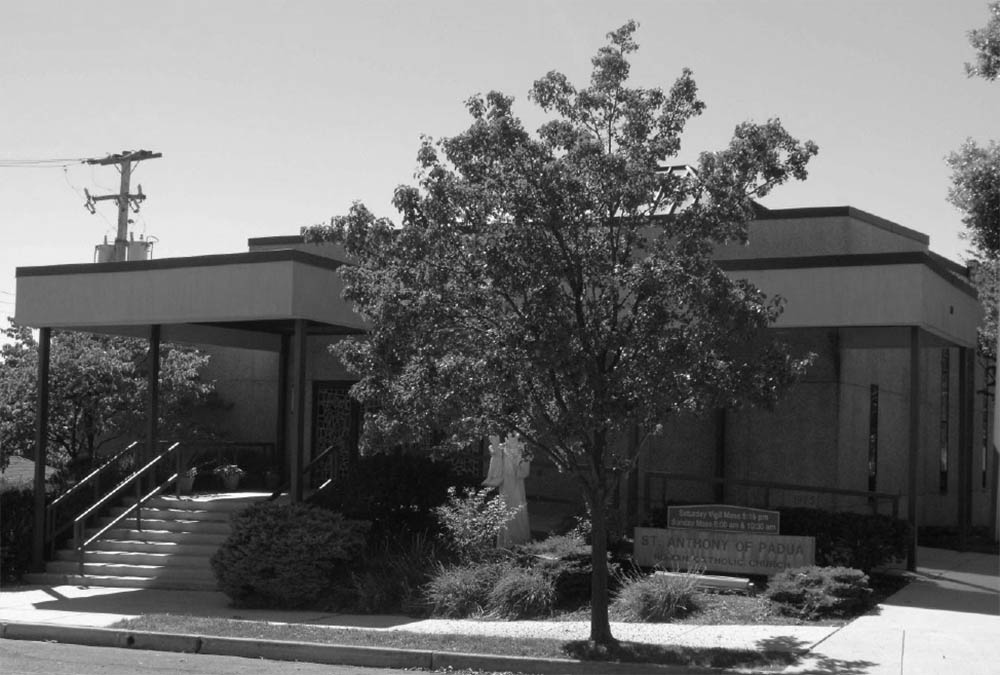 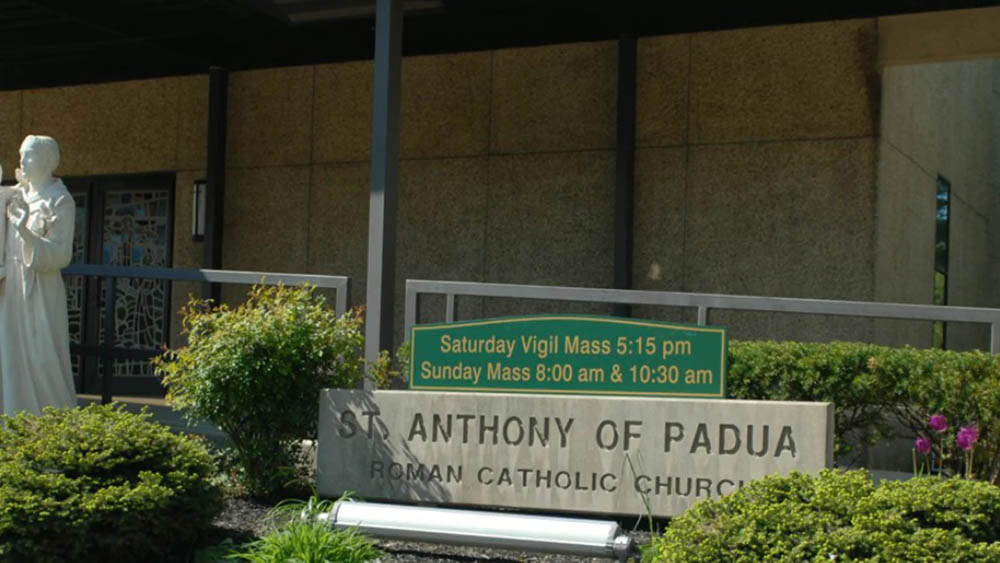 Construction on a new parish center began in 1981 and was completed in 1982.

The Rev. Raymond Slezak was appointed pastor in 1984. Under his pastorate, additions were made to the church exterior and the interior was renovated.

Father Richard C. Nachajski was appointed pastor of the parish in 1992.

Father Larry Hess, a native of nearby Stony Creek Mills, was appointed pastor of the parish in 2009. Father Hess was the eighth pastor to shepherd the faith community of St. Anthony of Padua.

In 2012, a Berks County judge sentenced Nachajski to two to seven years in state prison for stealing $425,000 from St. Anthony of Padua church between February 1998 and 2009 to lead a lavish lifestyle.

Father Larry Hess passed away on February 21, 2014 at the age of 63. Following Hess’ death, the Rev. Richard Clement was named administrator.

Bishop John O. Barres of the Allentown Diocese and the Rev. Clifton Bishop officiated at a Mass to celebrate the 100th anniversary of St. Anthony of Padua Roman Catholic Church on April 27, 2014 at 3 p.m. at the church.

Parishioners of both churches learned of the merger in a letter from Bishop John Barres that was read at all Masses Sunday. The letter cited financial and pastoral challenges as reasons for the consolidation.

St. Anthony’s of Padua Church was acquired by the nearby Nativity of the Blessed Virgin Mary Ukrainian Catholic Church.

On Sunday, June 28, 2015, the church held one final Mass before it merged with the St. John Baptist de la Salle parish in Shillington. It was an emotional time for those who gathered in St. Anthony of Padua Parish in Millmont to say goodbye to a church that had served the community for over 100 years.

As a symbol of the merger, Mass began at St. Anthony and finished at St. John. Buses were provided to help take parishioners to the new location.

Important records and items belonging to St. Anthony, including a relic of the body of St. Anthony, were also brought to St. John. 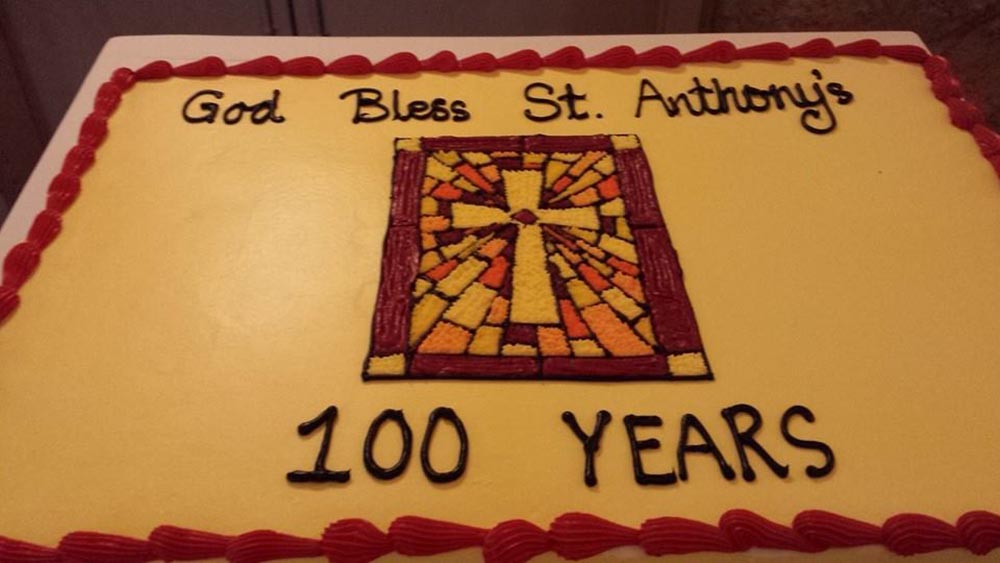